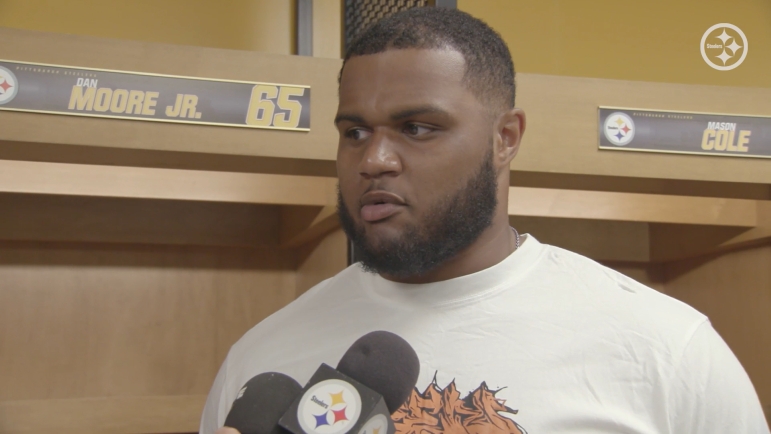 As the Pittsburgh Steelers prepared to take the field at Acrisure Stadium Saturday night against the Seattle Seahawks, it was made known shortly before game time that RB Najee Harris would not be suiting up for the evening’s exhibition game. This was to be expected as Harris had been dealing with a minor foot issue the last several days of training camp practice, leaving Pittsburgh little reason to put their workhorse back out there who is still on the mend and has proven everything he can do last season as a rookie to the tune of 1,667 total yards from scrimmage and ten total TDs.

With Harris out of the game and Benny Snell Jr. sidelined with a knee injury, running backs Anthony McFarland, Mataeo Durant, and Master Teague III got the opportunity to make their respective cases to make the roster as a potential compliment to Harris in the running game this season.

LT Dan Moore Jr. was asked about his teammates’ respective performances after the game concluded in a Pittsburgh Steelers victory. Moore’s response was one of praise, commending all the backs for the work they did and their diversified skillsets put on display Saturday night.

“Man, we got some good guys back there,” Moore said in the locker room Saturday night to the media on the team YouTube channel. “Each and every one of them have their own physical attributes that make ’em unique, but dude, they can all tote the rock.”

McFarland did the most damage on the ground Saturday night, toting the ball seven times for 56 yards (8.0 YPC). He was able to show his speed and elusiveness in the open field, bringing a dynamic element of burst and shiftiness that Pittsburgh has been looking for several years now to complement their big, bruising backs.

Jaylen Warren also had himself a night in limited action, carrying the ball six times for 34 yards (5.7 YPC) and showing off his prowess in the receiving game, catching four passes on five targets for 30 yards and a TD.

Master Teague III made good on his limited usage in the game as well for Pittsburgh, toting the rock six times for 31 yards (5.2 YPC). Durant only mustered four yards on two carries for the night, failing to match his teammates’ respective performances.

While a limited sample size, the backup RBs in Pittsburgh showed some promise in terms of being viable options behind Najee Harris for the 2022 season. Like Moore said, each of them bring their own unique skillsets to the table, leaving Pittsburgh with the interesting decision come cut-down day as to what attributes they will prioritize to keep on the roster for the runner that will spell Harris.

Obviously, special teams will go a long way in determining the backup RBs as well, but Pittsburgh would like to have a capable runner behind Najee that can allow their feature back to take a breather if needed and not feel pressed to play over 84% of the offensive snaps like he did last year. We will have to keep our eyes peeled on how these backs perform in the next two preseason games, and see who steps to the forefront as the most capable option behind Harris in the backfield this season.