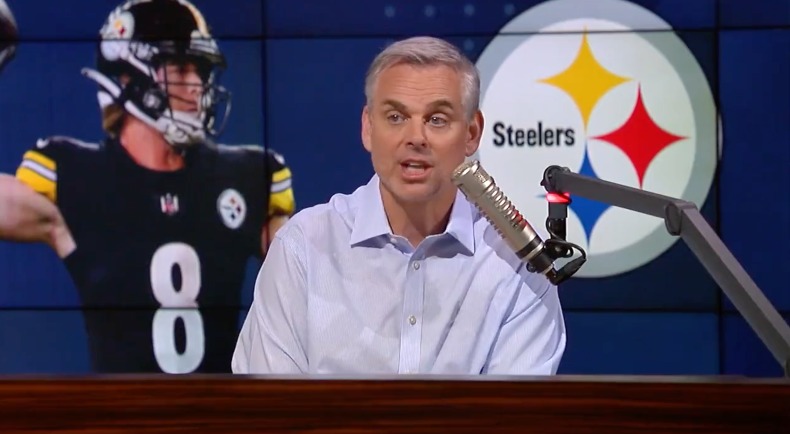 On The Herd, host Colin Cowherd said he believes Kenny Pickett should start, while also questioning whether Mike Tomlin could get the most out of him as a defensive-minded head coach.

“I would start Kenny Pickett, and really, it comes down to this. If Kenny Pickett starts and stumbles, he’s a rookie quarterback, they all do, it won’t be a disaster. Because the organization has too many good foundational pieces. Great front office, great pass rush, excellent coach, young star running back, young star receivers, young star tight end, there’s too much going for it,” Cowherd said.

"There's too many good foundational pieces here for it to be a complete mess."@ColinCowherd makes the case for Kenny Pickett pic.twitter.com/P1xDtP3qKY

On that end, I agree that Pittsburgh has the skill position talent around Pickett. The offensive line problems are a serious issue though, so despite having the other talent around him, Pickett has to be able to stay upright, and the Steelers are going to have to establish a run game with what right now looks like a shaky at best offensive line. What I don’t agree with Cowherd on are his concerns for Pickett.

Cowherd goes onto question how many years the Steelers can spend rebuilding their offensive line, and points to the Rams rebuilding theirs within a season. He also cites the Steelers’ offensive spending being toward the bottom of the league, which is such a lazy and tired narrative that I don’t even want to get into how stupid it is.

The offensive line question is fair, but the Steelers aren’t a team like the Rams that will throw a lot of money at outside free agents and trade draft picks willy-nilly. Not that one way is better than the other, but it’s just not and never has been Pittsburgh’s organizational philosophy.

It’s also not as if Pittsburgh hasn’t tried. Kendrick Green, Dan Moore Jr., and Kevin Dotson were all mid-round selections, Chukwuma Okorafor was a Day 2 pick, and the team spent on Mason Cole and James Daniels this offseason. It’s not as if they aren’t trying to rebuild the offensive line because Tomlin is a defensive-minded coach and it’s a defensive-minded organization, as Cowherd implies. They’ve tried, but as it stands right now, it looks like they went after the wrong guys.

That’s a whole separate problem, but it lies more in talent evaluation and not that the Steelers are a defensive-minded team. The last two years their first-round picks have been at running back and quarterback, and they drafted two wide receivers this year. They’re investing serious draft capital into the offense. Cowherd then goes on to list all the young quarterbacks who had early success with an offensive head coach.

I just think that’s a small sample size to pull from. Jared Goff eventually stagnated after a solid first year under Sean McVay, I’m not particularly convinced Kyler Murray is ever going to take the next step, and Mahomes, for as good as he is, played one game his rookie year. Joe Burrow led Cincinnati to a Super Bowl appearance in year two, but while he was good his rookie year, he wasn’t really setting the world on fire. Regardless of the background the coach comes from, if the quarterback is good enough, they’ll find success.

I know the league has changed, but when you look at all-time elite quarterbacks, Tom Brady had Bill Belichick, a defensive-minded head coach for the majority of his career. Peyton Manning had Tony Dungy and John Fox, two defensive-minded head coaches. You can say what you want about Pickett and whether or not he’ll be a successful starter, but if he isn’t, it surely won’t be because he’s playing for the Pittsburgh Steelers under Mike Tomlin. Talent rises above all, and if Pickett is talented enough, he’ll find success, regardless of who his head coach is or the team he’s playing for.