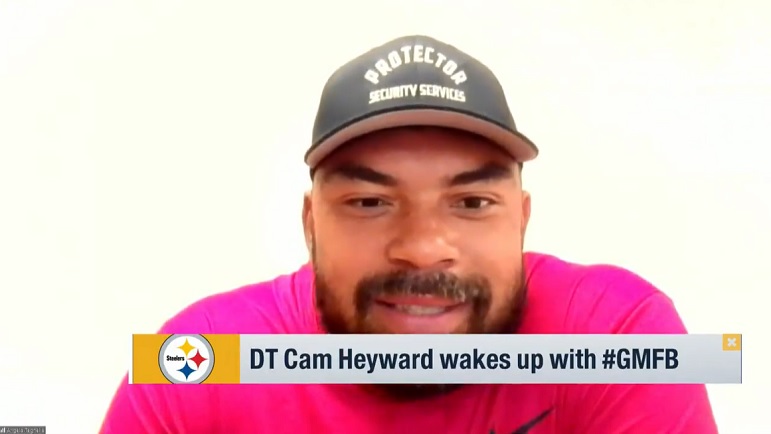 It’s a very difficult situation for any player in the NFL, stepping into a new situation at an important position as one of the oldest players on an offense taking on a leadership role, all while trying to gain a grasp of a new playbook, new playmakers and a new city overall.

So far, Pittsburgh Steelers quarterback Mitch Trubisky has been up to the task, holding down the starting job under center (for now) while starting to perform up to standard in training camp at Saint Vincent College in Latrobe. On Saturday, when the Steelers’ new-look offense takes the field for the first time against the Seattle Seahawks at Acrisure Stadium at 7 p.m., Trubisky will be the one to lead them onto the field.

That has many excited to see, including veteran defensive lineman and defensive captain Cameron Heyward. Appearing on NFL Network’s Good Morning Football Friday morning, Heyward praised Trubisky, stating he’s done a great job so far, and added that he’s excited to get a chance to see the new quarterback in a real game situation overall, instead of across from him in training camp action.

.@CamHeyward wakes up with #GMFB to talk @steelers defense, Big Ben, playing with his brother, and steak cooking competitions 🥩😋 pic.twitter.com/LUdOxChY1c

“I think he does a great job. Just getting outta the pocket when he needs to, he has got a heck of a cannon,” Heyward said to the Good Morning Football roundtable, according to video via the show’s Twitter page. “He’s trying to lead guys, and this is his first opportunity. We don’t know what he is gonna be like in a real game situation, so we’re excited to see what he can do.”

Through two weeks of training camp, Trubisky has had his ups and downs overall while adjusting to a new offense, new weapons to work with, and going against a veteran defense that is relatively familiar with what the Steelers are attempting to do on offense. That can make things difficult. However, all you want to see is progress, and that’s what Trubisky has shown in the last week or so, slowly settling into his role as the perceived starting quarterback while trying to lead a young, reshaped offense.

To receive praise from Heyward for his leadership and his performance to date is big for Trubisky, who doesn’t come off as the rah-rah leader, instead focusing on leading by example and working in the shadows.

But, like Heyward said on GMFB Friday, how Trubisky performs in a real game situation remains to be seen, at least in the black and gold. He has more than 50 career starts in the NFL with the Chicago Bears, but that’s the past. He’s in a scheme more tailored to his skillset and seems to have more freedom to use his legs and make plays on the run.

How that translates in 2022 remains to be seen, but Heyward speaks for all of Steelers Nation when stating he’s excited to see what Trubisky can do under center, starting on Saturday.