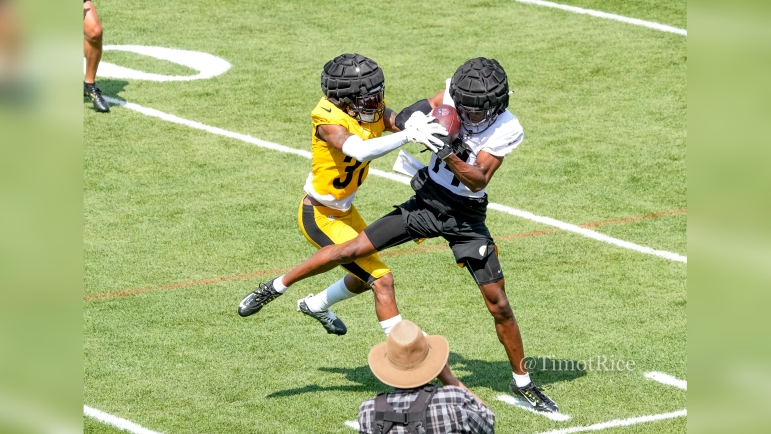 The favorite pastime of the Pittsburgh sports media has quickly become blowing up rookie wide receiver George Pickens, the second-round pick who is already a shoo-in for the NFL Offensive Rookie of the Year Award, apparently, before ever stepping foot inside of a stadium.

While the wonderful plays that he has been able to make in training camp thus far are undeniable, some team leaders such as head coach Mike Tomlin and Cameron Heyward have tried to tap the brakes just ever so slightly.

Still, the eyes see what they see, and fellow rookie wide receiver Calvin Austin III has seen the George product doing some things. “He’s made some plays that I haven’t seen too many people make”, he was quoted as saying following yesterday’s practice, via Josh Rowntree of 93.7 The Fan.

Almost universally regarded as being in possession of a first-round skillset, Pickens was available for the Steelers in Round 2 primarily because of questions about his knee, at the time still recovering from a torn ACL that largely kept him off the field in 2021.

But all observers this offseason have commented on his play, saying that you couldn’t even tell that he was injured by watching him perform these dexterous moves that put strain on your joints. Obviously a welcome sign, and it’s allowed him to get the better of a number of defensive backs. And do his share of talking, as the weeks wear on.

“It’s good though because he’s a young guy too, but he’s got that mindset where he wants to kill, and just work”, Austin said of Pickens, regarding the attitude that he brings to the field in his work. “We’re constantly just pushing each other to be the best we can be”.

As for Austin, the fourth-round pick out of Memphis, he has garnered his share of attention as well, though he doesn’t have as clear a path to playing time, the Steelers also retaining Diontae Johnson and Chase Claypool at the wide receiver position.

With Pickens grabbing hold of that third receiver spot, Austin is competing for whatever opportunities may be left over from the likes of Anthony Miller, Miles Boykin, and Gunner Olszewski, at least one of whom will not make the roster. Olszewski increasingly looks like somebody who will not merely be a return man.

One way or another, the Steelers are hoping that they have managed to cultivate a healthy depth at the wide receiver position after losing three of their top five on the depth chart via free agency. Their young draft picks are certainly playing a role in that, particularly Pickens, who, in the words of his draft classmate, is making plays not many can make. And that’s a good way to get on the field and stay there.