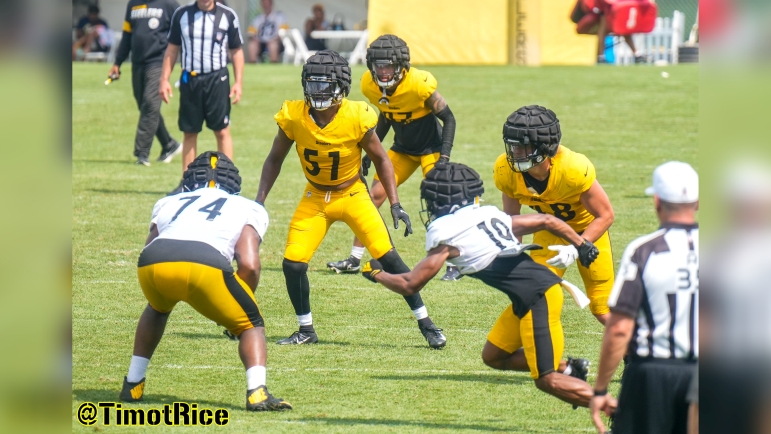 Rookie wide receiver Calvin Austin III out of Memphis does not come into the NFL with a ton of polish in his game. But the Pittsburgh Steelers fourth-round draft pick does have plenty of talent packed into one of the smallest frames in the entire league at any position.

It helps that he has exceptional speed, timed at the NFL Scouting Combine at 4.32 seconds, the third-fastest 40 times among wide receivers in 2022. That doesn’t crack the top 10 times in the history of the event, but it’s something Austin knows he always has in his bag of tricks—which is why he and his coach, Frisman Jackson, are trying to grow the rest of his game.

He told Josh Rowntree for 93.7 The Fan that Jackson “is always challenging me about working with me on my intermediate routes and stuff like that, because I’ve always got, in my back pocket, the ability to go vertical”, following practice yesterday. “That’s always something I can do”.

Truth be told, however, if he can be an effective deep threat, that might be the path of least resistance for him being able to get on the field as an offensive contributor, because the Steelers don’t have any truly established blue-chip deep threats. Chase Claypool’s game speed in that department simply doesn’t match his timed speed, and his jump-ball ability remains too inconsistent to make up for the contested-catch situations he is in.

Fellow rookie George Pickens could potentially fill that vertical role, although he only ran a 4.47 40-yard dash time at the Combine. It’s almost certain that he could time faster—he said at the time that it was the first time that he ran without a brace since tearing his ACL.

But it should go without saying that Austin’s long-term future will only be secure if he can become a complete wide receiver. He will almost certainly need to be able to play all over the field, including inside, developing more nuance in his route-running to make sure that he can create short-area separation.

Of course, it’s always possible that he just does one thing so well that he can’t be taken off the field, and does everything else well enough to justify it, but that very much remains to be seen. For the time being, we shouldn’t even expect to see him get a ton of offensive snaps.

After all, who are you going to take off the field under normal circumstances? Diontae Johnson? Najee Harris? Pat Freiermuth? Claypool? Pickens? There’s a whole lot of talent that the Steelers have at the skill positions right now. It’s just a matter of getting the most out of them, and having the quarterback, and the offensive line, to do that.