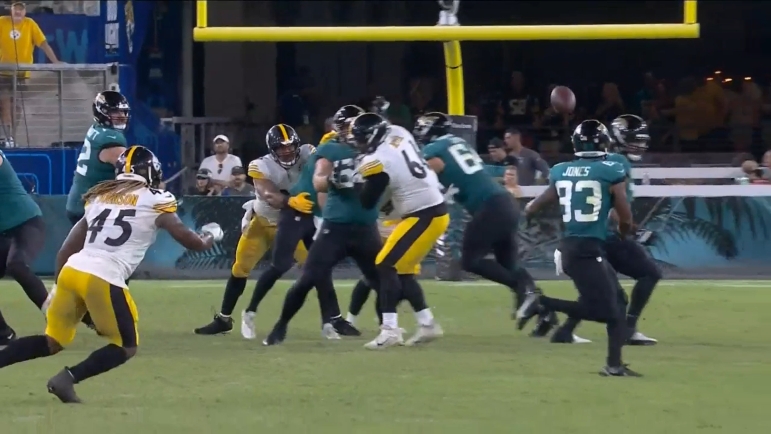 Topic Statement: Buddy Johnson will not make the 53-man roster.

Explanation: If you saw either of my 53-man roster predictions thus far (the second one running earlier today), you know that I believe Buddy Johnson’s roster spot is very much in jeopardy. With spots at a premium this year and in a crowded position group where a rookie is impressing, the former fourth-round pick has done little to distinguish himself in his second season.

I’ll just say this. There’s always a numbers game. And even with Ulysees Gilbert III out of the picture due to injury, you’re still not finding a place for Buddy Johnson on this team, at least not easily. For me personally, I can’t manage it without carrying six inside linebackers. They did it last year, but that was with Johnson basically redshirting. He has to hold his own this time.

And in my observations, at least, he hasn’t really done that—certainly not better than has rookie Mark Robinson, who has only been playing linebacker for a couple years at this point. Some scoffed at the idea of them ‘wasting’ a seventh-round pick on a running back turned linebacker, but he’ll be on this roster.

While Johnson’s defensive work during the preseason may have not offered much to get excited about, he did make more plays in training camp. Alex Kozora even noted that he surprised a bit in coverage drills, coming into the league with the perception of being a thumper.

He also graded out better on defense this past game than in the first, and the tape shows it, particularly against the run. He looked more comfortable overall than he did last week, though he was still a bit tight in coverage.

If he is really going to be a fixture on special teams, then that opens up Marcus Allen’s roster spot, or potentially Miles Killebrew’s at safety. Maybe even wide receiver Miles Boykin, or a defensive lineman. There are ways to fit him.