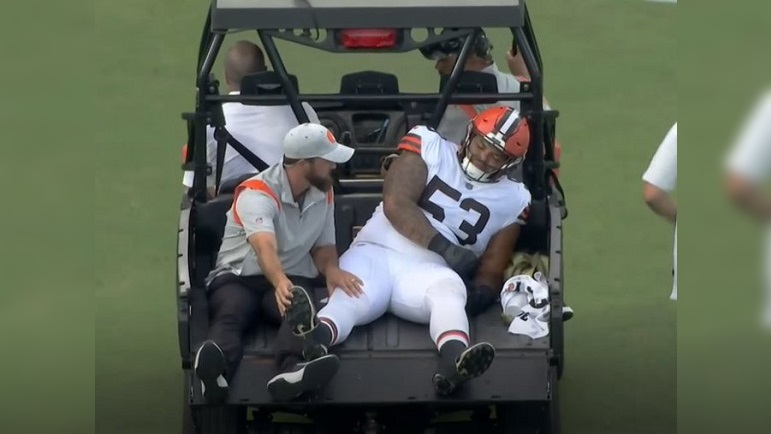 The Cleveland Browns are expected to be without center Nick Harris for the season after suffering a serious knee injury yesterday, head coach Kevin Stefanski told reporters a short time ago.

Harris was carted off the field in Friday’s preseason opener against the Jacksonville Jaguars after his leg buckled on this pass protection rep.

Prayers up for Browns center Nick Harris. He was carted off the field after this play. pic.twitter.com/7ZgM5iQ7ut

Harris was expected to take over the starting center job after veteran J.C. Tretter was released earlier in the offseason. Tretter remains a free agent and it’s certainly plausible he returns to the team as a trusted veteran option. Current internal options include Ethan Pocic and seventh round selection Deaton Dawson. Pocic replaced Harris yesterday. Harris was the team’s fifth round pick in 2020 and had two career starts to date.

The Browns’ offensive line has been a strength for the team over the last two years highlighted by guard Wyatt Teller and tackle Jedrick Wills, though the group has struggled to stay healthy. Wills and right tackle Jack Conklin have battled injuries and now the team has lost Harris for most if not all season.

Cleveland beat the Jaguars 24-13 in their opener. Quarterback Deshaun Watson played but went just 1/5 for seven yards, though WR Anthony Schwartz hurt him with drops. Former Steeler Josh Dobbs shined, going 10/13 for 108 yards and one touchdown while also rushing for nine yards.

The Steelers will face the Browns Week 3 and Week 18.