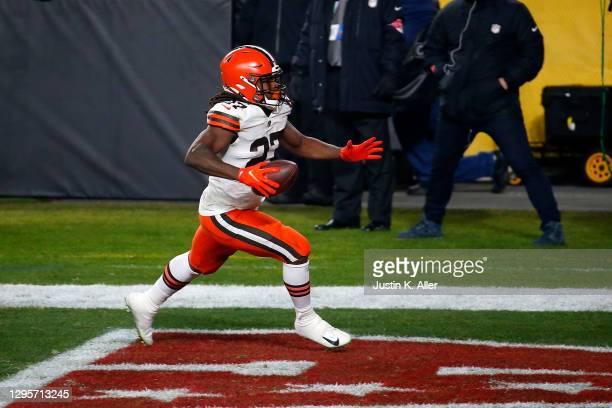 The Cleveland Browns boast potentially the most potent backfield in the NFL, spearheaded by the dynamic duo of Nick Chubb and Kareem Hunt. Chubb is coming off his third Pro Bowl nod in four NFL seasons and is one of the best pure runners in the league, having the speed and power to rip off chuck gains with ease.

Hunt enjoyed a breakout rookie campaign in 2017 as a member of the Kansas City Chiefs, making the Pro Bowl after amassing 1,782 total yards on 325 touches with 11 total TDs. However, Hunt was released the following season after a video surfaced of him punching another woman in a domestic violence case. Once he was cleared, he signed with the Browns in 2019, forming a two-headed monster at RB with Chubb behind a top-flight offensive line.

Heading into 2022, Hunt wishes to be compensated as such for his skill set and the value, he provides Cleveland as the 1B to Chubb’s 1A.

It was previously reported that Hunt desired a new contract from the Browns as he has been sitting out of team portions of practice the last couple of days to display his displeasure with his current deal. Reports surfaced that if the Browns don’t intend to give Hunt an extension, he would request to be traded from Cleveland.

Browns RB Kareem Hunt—currently seeking a contract extension—did not participate in team drills for the second consecutive practice on Saturday. Hunt told the team multiple times recently, his current plan is to participate in individuals drills only. Friday marked the first 1/4

As of Sunday morning, Mary Kay Cabot of Cleveland.com reported that Hunt has officially asked the team for a trade. However, according to Cabot’s sources in Cleveland, the Browns have told Hunt that they have no intention to trade him at this time.

Breaking: Kareem Hunt has asked the #Browns to trade him — and they've told him no; his best strategy would be to kill it for them this season and earn his next contract https://t.co/xt3anSzA1o

Plenty of players of taken the stance of requesting a trade if they could not get a contract extension this offseason. A.J. Brown found himself traded from Tennessee to Philadelphia after a contract squabble with the Eagles. Deebo Samuel made a trade request to the 49ers earlier in the offseason before getting a hefty extension to stay in San Francisco. Hunt sits on the final year of a two-year, $12 million extension he signed on September 9, 2020, per OverTheCap. He has a cap hit of $6.250 million in 2022 and desires another bite of the apple prior to going into his age-28 season.

While plenty of fantasy football players may find the split between Hunt and Chubb in the backfield to be frustrating, it’s an extremely effective strategy for a Browns team that wants to be run-heavy on offense. Hunt complements Chubb as an accomplished runner himself as well as a superb pass catcher at the position, posting 97 receptions in 32 games with Cleveland. He missed both contests last season against Pittsburgh, but totaled 77 rushing yards and 21 receiving yards in two regular season games against them in 2020.

A trade of Hunt would signify a notable loss from the Cleveland backfield in terms of talent. However, Cleveland has D’Ernest Johnson, Jerome Ford, John Kelly, and Demetric Felton in the backfield as well, suggesting they have the depth and young talent on rookie contracts to move on from Hunt after the 2022 season. It’ll be important to keep an eye on the situation in Cleveland, as yet another talented offensive piece may be in question in terms of suiting up against the Steelers this season.