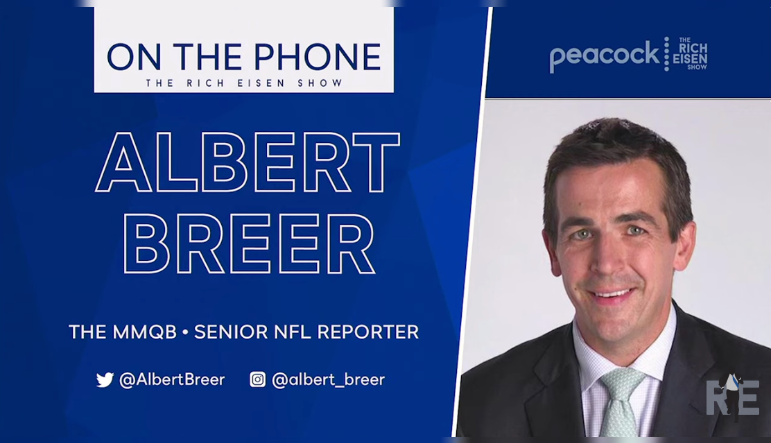 Based on all the work the Pittsburgh Steelers did in the offseason reshaping and retooling the roster ahead of the 2022 season, it’s very clear that the black and gold believe they can contend one season after losing long-time GM Kevin Colbert and quarterback Ben Roethlisberger to retirement.

Contending likely only comes with veteran free agent signee Mitch Trubisky under center as the next starting quarterback for the Steelers, at least in 2022, according to Sports Illustrated’s Albert Breer. Appearing on The Rich Eisen Show Monday afternoon following a tour of Steelers Training Camp at Saint Vincent College in Latrobe on Chuck Noll Field, Breer stated the the Steelers “feel like” they have a contender ahead of a year of transition, and that the contention likely comes with Trubisky — not rookie Kenny Pickett or Mason Rudolph – under center, at least this season.

That shouldn’t come as much of a surprise as the Steelers very quickly moved to sign Trubisky in free agency on the first day of the legal tampering window due, in large part, to his skillset and the ideal fit in the Steelers’ offensive system under second-year coordinator Matt Canada.

Despite the quick addition of Trubisky, the Steelers still went out and drafted Pickett at No. 20 overall in the hopes that he’s the future franchise quarterback for the Steelers. That said, he’s had his fair share of struggles early on in training camp, though that’s not much of a surprise overall, especially with it still being very early in camp.

While history in the modern era suggests that rookie quarterbacks will start games in their rookie seasons, Breer believes that the Steelers are better off with Trubisky under center, at least right now, rather than rushing Pickett along, which should help the Steelers attempt to contend in 2022.

“…The Steelers aren’t going to do something based on how somebody else does it [with rookie quarterbacks],” Breer said to Eisen Monday, according to video via The Rich Eisen Show’s YouTube page. “Kenny Pickett looked like he has a long way to go, from what I saw out there. That could change, but that’s what it looks like…Trubisky looks like there might be a little something there.

“I know he took a lot from playing with Josh Allen in Buffalo, and I think he can be a serviceable starting quarterback, and maybe more than that. We’ll see. I think they feel like they’ve got a contender there [in Pittsburgh], and having a veteran quarterback, a guy who’s played a lot,  in Mitch Trubisky helps and I don’t think they’re going to push Kenny Pickett out onto the field…right now it doesn’t look like he’s ready to start.”

That checks out with what our own Alex Kozora has observed at training camp, though it’s still early in camp with full pads just coming on Monday. Pickett has looked a bit overwhelmed at times, slow to read some things and generally has held onto the football too long. That’s okay; it’s very early.

Wouldn't read too much into Kenny Pickett working 2nd team today. Don't see it as clear ascension of Mason Rudolph on the depth chart. Overall, Rudolph's been better. Just mixing and matching as they've done with other position groups. Rudolph may be #2 tomorrow. #Steelers

Mason Rudolph has looked strong through the initial part of camp getting reps with the second and third strings, while Trubisky continues to hold down the first-team reps. It’s pretty clear at this point that the starting job to open the season Sept. 11 on the road against the Cincinnati Bengals is Trubisky’s to lose, though Rudolph is making a push.

The way the Steelers certainly envisioned it during the offseason though is that Trubisky is the starter and plays relatively well enough to keep the Steelers in contention, before eventually handing the reins of the offense to Pickett, jump-starting the Pickett era in the black and gold.

Through five training camp practices, nothing has truly happened to change that belief overall.