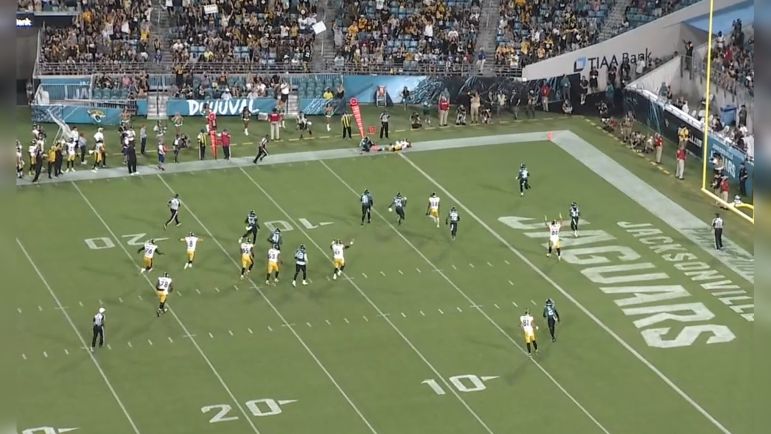 You ever see something on television that makes you double take making you think to yourself “What the heck did I just see?”

Well, if you tuned up for the Steelers’ second preseason game against the Jacksonville Jaguars on Saturday night, you may have caught one of those moments. At least Dave Bryan of Steelers Depot did anyway, tweeting out a near-perfect synchronization celebration with LT Chukwuma Okorafor and QB Kenny Pickett giving their best Super Mario Bros imitation as both leaped up into the air twice at the exact same time.

“I had no clue about that,” Okorafor said Monday in the locker room on video provided by ESPN’s Brooke Pryor. “It was pretty funny though. Never, I mean, I’ve been to the league now many years and I’ve never done that. It’s shocking. It’s kind of weird.”

Chuks Okorafor said he’s never skipped in celebration, never seen Kenny Pickett do it either. Completely random they both did it IN SYNC during the game Saturday. pic.twitter.com/SXmThBEx3S

This was a great catch by Bryan as several others started to point out the simultaneous celebration that may remind some people of scenes from the Matrix (I haven’t watched the whole series through so I wouldn’t know). Either way, it was a unique moment shared by Pickett and Okorafor as they celebrated the touchdown scored by RB Benny Snell Jr. as the offense drove down the field in the two-minute drill to get the score and the lead right before halftime.

There’s no better way to describe the moment than what Okorafor called it: shocking and weird. The two leaping up at the same time mirroring one another seems almost edited in a way. In all likelihood, Okorafor saw Pickett jumping up in front of him and followed suit mirroring his QB’s moments in complete synchronization. Hopefully, this “bond” the two shared on the TD celebration grows into something more as Pickett competes to earn the starting job and Okorafor figures to protect him for several years to come.