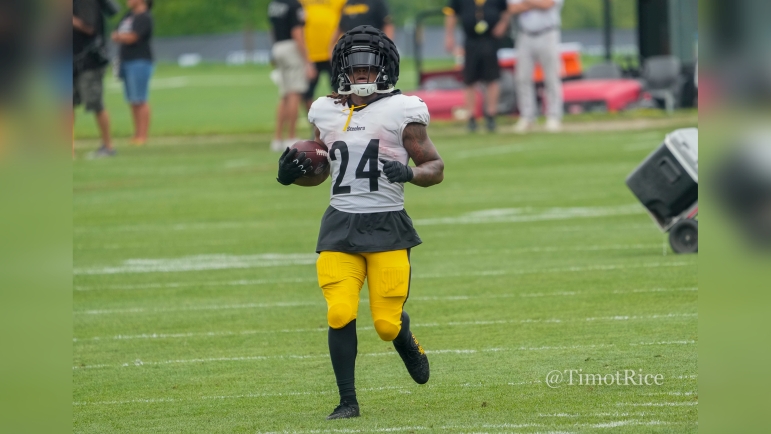 As more and more guys go down with injuries early in training camp at Saint Vincent College in Latrobe, that’s opening doors of opportunities up for backups and other young players vying for a spot on the 53-man roster or the practice squad for the Pittsburgh Steelers ahead of the 2022 season.

One such player who is taking advantage of an opportunity created by an injury to star running back Najee Harris is fourth-year running back Benny Snell, who earned some praise from Steelers head coach Mike Tomlin Thursday following practice.

Asked by a reporter following practice about what he’s seen in Snell’s growth, Tomlin praised the veteran running back’s conditioning in being able to take first-team reps for the Steelers, while also being able to maintain his responsibilities as a key special teams player for the black and gold.

Those special teams abilities and responsibilities have been Snell’s calling card early in his career as he’s held down the No. 2 running back role in Pittsburgh since becoming a Steeler in the fourth round of the 2019 NFL Draft.

It takes an army to bring down Benny Snell. #Steelers pic.twitter.com/WOgXrFssyX

“You know, he’s done a really good job of understanding NFL conditioning and that’s gradually improved over the course of his time here. I’d be remiss if I didn’t mention that,” Tomlin said of Snell, according to video via Steelers.com. “He works hard in offensive periods. And in particular, when a guy like [Najee Harris] is down, he gets an opportunity to really show his capabilities. But at the same time, he doesn’t wane in regard to his special teams responsibility.

“That’s why I mentioned his conditioning, because you think of his expanded opportunities as an offensive player, but as a coach, I look at a guy taking expanded offensive reps while at the same time maintaining his special teams responsibility and that is impressive.”

When Tomlin goes out of his way to praise a player like he did Snell on Thursday, it’s genuine, and one can read deeper into it. While there has been many questions raised regarding the backup running back spot to Najee Harris entering the 2022 season, Snell has always been the answer for the Steelers, at least internally, or so it seems.

After a strong rookie season that saw him rush for 426 yards and two touchdowns filling in for the injured James Conner, Snell has fallen back to earth in recent seasons. However, as his stats offensively declined, Snell has remained a special teams stalwart, playing 43% of the snaps on special teams in 2020 before jumping to 67% (326 snaps) in 2021 as coordinator Danny Smith put more and more trust in him on special teams.

Snell probably makes it. Other guys likely fighting for one spot. Should be lots of chances. Harris doesn't need much action this summer. Limit his reps/contact.

Now, with Harris injured, Snell is seizing upon the first-team reps at running back hoping to fully cement his role as the No. 2 running back in Tomlin’s eyes. Credit to Snell though for not letting his play on special teams in training camp drop due to his work on the first team though, which Tomlin pointed out was largely due to his conditioning.

Snell looks slimmer, more explosive and and much more comfortable in his role and overall standing with the Steelers entering Year 4. Hearing some serious praise from Tomlin, who has always been in Snell’s corner, has to feel pretty good for a guy that many on the outside have seemingly written off.

Mike Tomlin with the cameo in James Washington's post-game interview.