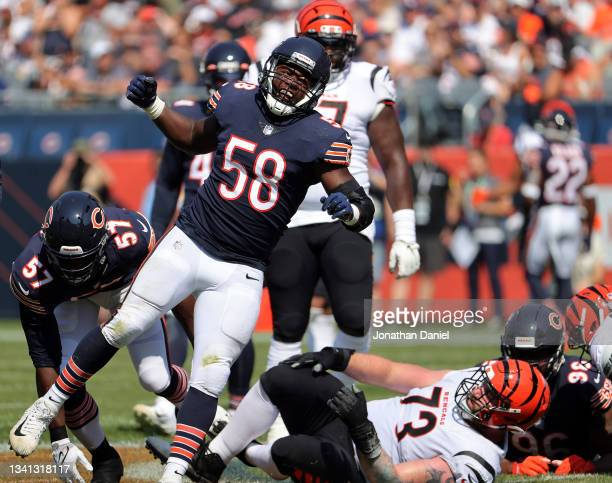 Early Tuesday morning, NFL Network Insider Ian Rapoport tweeted out a post put out by Chicago Bears LB Roquan Smith officially requesting a trade from the team. According to Smith, the Bears’ front office has refused to negotiate with him in “good faith”, stating the team doesn’t value his contributions as a player and leader in the locker room up to this point for the caliber of play he has shown in his first four seasons in the NFL.

Since being drafted eighth overall in the 2018 NFL Draft, Smith has racked up 524 tackles, 14 sacks, a forced fumble, a fumble recovery, 17 pass deflections, five interceptions and a defensive touchdown as a two-time second team All-Pro (2020, 2021).

Roquan Smith is playing at a 17-game pace of:

Given his trade request and pedigree as one of the best young inside linebackers in the league, many Steelers fans are probably wondering if Pittsburgh would have any interest in pursuing a player of Smith’s caliber should he be made available via trade.

From a plausibility standpoint, the Steelers could investigate what a trade for Smith would entail on their end. It’s no secret that LB Devin Bush hasn’t lived up to expectations thus far heading into his fourth season after Pittsburgh declined his fifth-year option, making him have to prove it in 2022 in order to consider re-signing him after the season. With Smith, you would have a proven commodity at the position that is only on the rise, having just turned 25 this offseason. Adding him into the middle alongside Myles Jack with the other star defenders Pittsburgh has up front and on the back end would go a long way in beefing up a defense looking to return to prominence in 2022.

While Pittsburgh hasn’t been a team known for parting with early draft capital, their recent history suggests that they would be willing to do it to land a talented player like when they traded a first-round pick for Minkah Fitzpatrick in 2019. They also have shown to be willing to make a big move to address a key position of need like when they traded up ten spots to select Bush in the 2019 NFL Draft, parting with second- and third-round selections to make the move. Should the team not be convinced that Bush is the answer long-term or in 2022, Pittsburgh could see Smith as a valuable asset to at least explore.

From a probability standpoint, the likelihood of Pittsburgh doing more than simply sending a feeler phone call to Chicago about Smith’s availability is likely low. As mentioned earlier, Pittsburgh looks primed to roll into the 2022 season with Bush and Jack as their starting ILBs, with Robert Spillane likely getting a fair amount of run as the primary backup to Bush. Seeing as the team has expressed a fair amount of optimism in both Bush and Spillane during the offseason, along with Brian Flores in tow to get the most out of the ILB unit, the need to pursue Smith may be low on the totem pole for Pittsburgh.

Another big problem Pittsburgh would face should they consider trading for Smith is the fact that the man wants to get paid. Rightfully so, and even though Pittsburgh has the ability to create cap space to figuratively get an extension done with Smith, they have just signed Fitzpatrick, Chris Boswell, and Diontae Johnson to lucrative deals over the last two months. They also just signed Jack this offseason to a two-year deal with $8 million per season, thus making it difficult to justify trading premium draft capital for Smith and turn around and make him one of the highest paid off-ball linebackers in the game.

In terms of the talent and the character of the player, I would like nothing more than to see Roquan Smith suit up in the Black and Gold alongside Myles Jack to solidify Pittsburgh’s front seven for the next several years. However, there are many hoops that the team would have to jump through to make such a dream a reality, making such chances probably unrealistic at this time. Pittsburgh has shown an affinity for players they liked in the pre-draft process, and while they didn’t have Smith in for a pre-draft visit, they were well represented at his Pro Day in 2018, likely knowing he would be long gone by the time it got to their first selection at #28 overall.

As much as I would hate to see it, a team like the Baltimore Ravens would make a lot of sense to pursue Smith given the lack of depth and proven playmaking they have in their ILB room at the moment, potentially sniping Pittsburgh yet again on a player many fans would covet. Time will tell if the Bears and Smith can work out their differences, but as we sit here today, yet another young, talented defender is looking for a change of scenery in the ever-changing environment of the NFL.