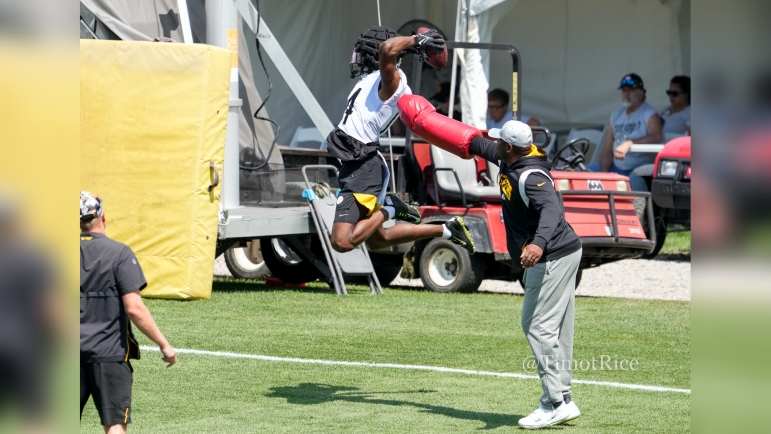 Former Pittsburgh Steelers outside linebacker and current host of the Arthur Moats Experience with Deke Arthur Moats weighed in on the team’s rookie wide receiver George Pickens’ camp performance. In doing so, he posed an intriguing question regarding what to make of the hype around the rookie receiver but he first led off with praise of what Pickens did today.

“George Pickens, without a doubt,” Moats stated when asked what the biggest story out of Wednesday’s practice is on 93.7 The Fan’s Poni & Mueller show. “This dude has obviously been showing why he was drafted where he was and the excitement around him. The more and more you see this dude, today, for example, in a two-minute drill, he was just taking over the practice.”

Moats, who has a four-year stint with the Steelers from 2014-2017, covers the team on his aforementioned show. As such, he was in attendance at this Wednesday’s practice, where he saw Pickens first-hand. With reports of a stellar connection with quarterback Mitchell Trubisky as well as his confidence in trash-talking against the defense, the hype train on Pickens is indeed taking off. Pickens’ reported character issues and injury concerns coming out of the 2022 NFL draft are widely regarded to be the reason for him to unexpectedly fall to the Steelers at pick 52. While it appears that Pickens is headed toward a stellar rookie season and career, it is still very early, and the context around his performance may prove that it is not as simple as it appears at face value. Moats wondered aloud if Pickens’ success was due to defensive back struggles.

“You start to ask those questions,” Moats said regarding the possibility. “I’ve been having similar internal discussions. Is this kid really like that? Or is it the alternative where maybe our DBs [defensive backs] aren’t as good as we think they are based on the expectations we have for them? So it’s kind of like me playing that tug of war within myself. I think the biggest testament though that we will see in terms of how legitimate or how much we should really start to buy into it is when we start seeing him in these games doing it. Because it’s one thing to do it in practice.”

Questioning the quality of opposition to contextualize success is only fair in the sport of football, especially in the wide receiver position. Pickens’ top competition in training camp has been first-team cornerbacks Ahkello Witherspoon and Cameron Sutton, both of whom are out to prove themselves as the team’s top corner. However, it is a bold assumption that two of the team’s top corners are having an underwhelming camp, with some reports indicating the contrary. Moreover, with the team’s free agent signee and projected top three cornerback Levi Wallace recently returning from injury, Pickens’ had an opportunity to face him in Wednesday’s practice and was able to catch a touchdown against him. This further undermines the notion that Pickens’ success is due to poor cornerback play, as it’s unlikely that the team’s top three cornerbacks are all having underwhelming camps.

Regardless, there is much to be said regarding Pickens’ performance and confidence as a second-round rookie playing against established NFL veterans. If anything, pouring cold water on the hype train may serve as a net positive for Pickens, as it could serve to dampen the inevitably high expectations. As Head Coach Mike Tomlin insinuated several times during training camp, Pickens needs to capitalize on his talent by developing the skillset.

With the multiple reports on Pickens impressing at training camp, it’s difficult to not be excited for the rookie’s debut in the black and gold. Given the importance of confidence in having a successful NFL career, these reports may just be a sign of great things to come. As Moats mentions, however, the only way to truly answer this dilemma is by waiting for Pickens to prove himself in pads.