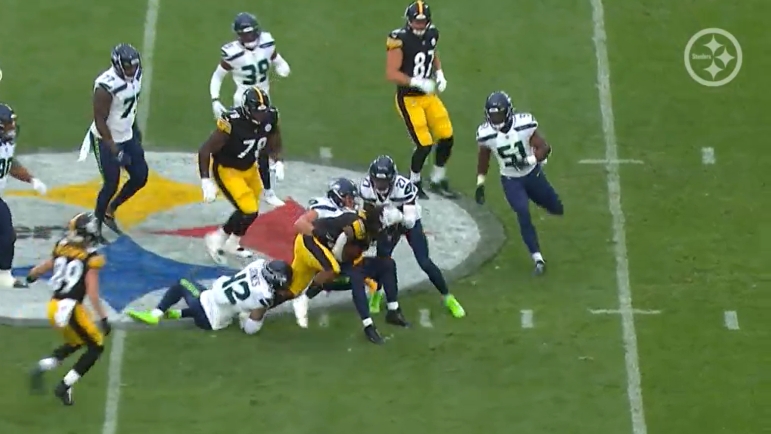 While the quarterback was under the spotlight for the Pittsburgh Steelers tonight, the natural byproduct of any team moving on from a franchise player at that position, another priority for the organization is to not only continue to re-establish the running game, but also to identify some depth.

Training camp has actually been somewhat encouraging in that regard thus far, and tonight’s preseason debut was an extension of that, with third-year Anthony McFarland, and rookie free agents Jaylen Warren and Master Teague III, all running hard. Warren even scored, though he also put the ball on the ground.

With Najee Harris and Benny Snell Jr. both not playing, it was McFarland who got the opportunity to start, and he was able to make a handful of plays that we did not see from him during his first two seasons since coming out of Maryland in 2020. He finished the game with 56 rushing yards on seven carries, and earned some praise from quarterback Mitch Trubisky.

“A-Mac, he was running hard tonight”, he said. “He was tough to bring down. He’s so quick and shifty, it’s fun to watch him with the ball in his hands, and he’s just gonna keep doing those things when given his opportunities”.

As mentioned, though, Trubisky and the Steelers were generally pleased with the running back position as a whole, again, minus Warren’s fumble. Despite the mistake, he finished the game with 34 rushing yards and six carries, and caught four passes for 30 yards and a score. As for Teague, he added another 31 yards on six attempts.

Mataeo Durant only got two carries, going for four yards, but he was the back the Steelers used in hurry-up mode at the end of the game, and threw a key block to allow Kenny Pickett to get to the sideline on a scramble.

“All the backs are running hard. I think us going live in practice really translates the game”, Trubisky said of the Steelers’ live tackling sessions during training camp, a rarity in today’s NFL. “Those runners run so tough and they take care of the football, and they hit the holes while they’re opening, so the o-line’s doing a great job of creating for them, and those backs are making some great plays in open space”.

Of course, without Najee Harris in the mix, we’re looking at a very incomplete picture, but tonight gave a closer look to a possible competition for the number two running back position, if Snell’s role can be contested.

Snell is the most veteran back on the team, going into his fourth season, but nobody on the depth chart behind Harris can be described as a proven commodity or fixed in his role. McFarland, though, certainly took a step forward in securing a roster spot tonight.