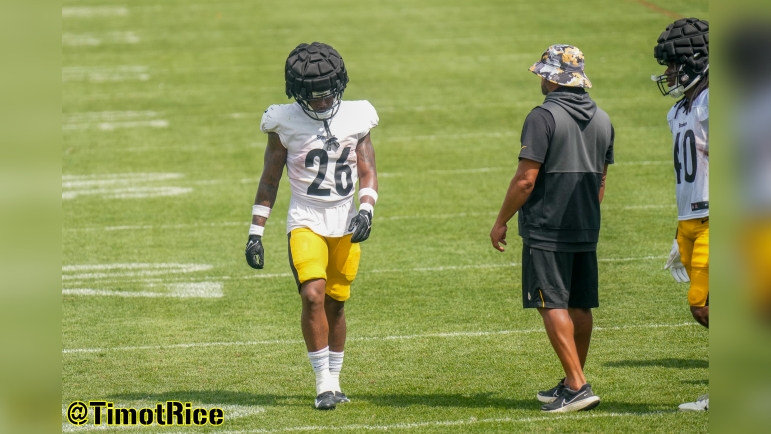 Entering his third training camp with the Pittsburgh Steelers and first-ever at Saint Vincent College in Latrobe, third-year running back Anthony McFarland found himself staring down what likely was his final chance to show something to the decision makers within the Steelers’ front office and coaching staff.

After a rather disappointing rookie season in 2020 and then a lost season in 2021 due to an MCL injury and then issues with COVID, McFarland faced an uphill climb to try and carve out a role in the Steelers’ backfield behind star running back Najee Harris. So far in training camp though, McFarland has answered the bell, coming out swinging within the backup running back competition with the likes of undrafted free agents Mataeo Durant and Jaylen Warren.

According to Steelers Depot’s Alex Kozora, McFarland is pushing himself closer to the inside of the roster bubble, rather than the outside that he entered training camp at. He’s made some impressive plays as a receiver in 1-on-1 drills and team situations, and has flashed a bit as a runner, leading camp in yards per carry average, per Kozora’s charting.

Still, he has to show it when it matters most: in games. That’s where he’s struggled to truly perform and showcase his immense talents featuring home run speed. So far, he’s showing it in training camp, making an effort to show he’s a complete, all-around running back. That’s what he’s trying to prove overall in an effort to stick on the 53-man roster, he said to the Pittsburgh Tribune-Review’s Joe Rutter in Latrobe.

“I feel like I can line up anywhere and show my versatility,” McFarland said to Rutter, according to original reporting from the Tribune-Review. “Wherever they ask me to line up, I’ll put my head down and work. …I’ll throw my nose in there in pass pro. I’m trying to show I can be an all-purpose back.”

He’ll have to show he can be an all-purpose back in games, considering the Steelers are looking for more than just a one-trick pony behind the likes of Harris and presumably Benny Snell Jr. That could be a tall task, considering he’s the smallest running back the Steelers have on the roster. That said, he’s also the fastest and brings an added dimension to the game the Steelers desperately need on offense out of the backfield: home run speed.

If he can consistently find ways to make splash plays when on the field, whether that’s on the ground or through the air, that should be enough to keep him around, rather than him becoming a good pass protector or anything else he envisions an all-purpose back is. He has to stay true to his game and really start turning some heads with what he skillset allows, rather than hoping to add something this late into his tenure in Pittsburgh.