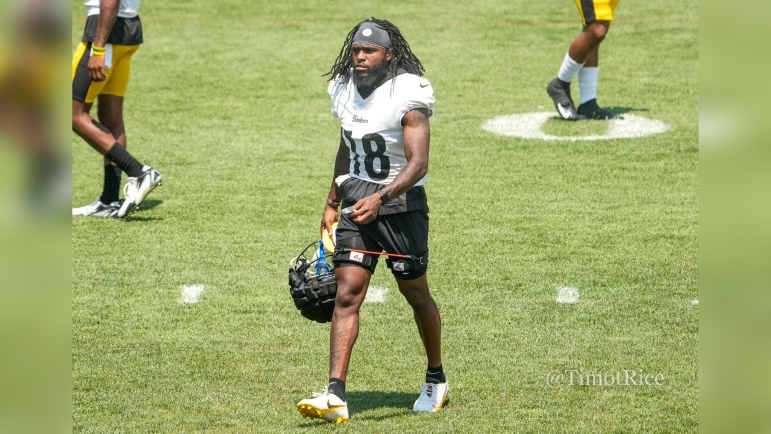 I cannot ever recall a contract event that did not affect the fans and the media more than it affected the actual team’s coaches and players. The latter group is actually in the business and best understands the fleeting nature of the profession and the importance of looking out for oneself, financially.

That’s why it was somewhat amusing to listen to The Cook and Joe Show on 93.7 The Fan yesterday, during which a media spiel about how awful it was that Diontae Johnson hasn’t been a full participant in practice was the prelude to an interview with two players who expressed full support for their teammate.

I don’t know that the hosts were looking for some type of answer that agreed with the views that were espoused prior to Chris Wormley and Mason Cole taking to the airwaves, but they certainly didn’t echo the hosts’ sentiments.

“I was here last year when T.J. was kind of going through a kind of similar thing with his contract”, Wormley said. “I think all of us support Diontae and what he’s trying to do. We know he’s not doing it out of malice towards the team. He’s looking to set himself up for the rest of his life. That’s what we’re all trying to do, and we all support him”.

A third-round draft pick out of Toledo in 2019, Johnson has improved every season for the Steelers in spite of the worst era of quarterback play the team has seen in the past two decades. While he is not without his warts, he played to a Pro Bowl-caliber level in 2021 and topped both 100 receptions and 1,000 yards, the first Steelers wide receiver to hit either mark since 2018—when two did.

That was the perspective of a defender, but Cole, the team’s starting center, echoed the sentiment. “Obviously wish he was out there, but he’s got to do what’s best for him, and like Worm said, it’s not out of malice for the team, it’s for the better of him, and we support him in that”, he said. “But we also support the next guy that’s getting the opportunity to get quality reps”.

Somewhat in contrast to what Starkey and Cook have said, Johnson has not been entirely idle on the field, and is certainly participating to a greater extent than Watt did last year, when he worked completely off to the side. Johnson is at least participating in individual drills, and put the pads on last year for some very limited work, for example, in practicing jet sweeps.

The fourth-year veteran, who is seeking a new contract extension during an offseason in which his fellow fourth- and fifth-year wide receivers have re-written the wide receiver market, has been criticized primarily due to the fact that the offense is in transition.

Ben Roethlisberger is gone, and Mitch Trubisky and Kenny Pickett are both new to the team. Johnson has plenty of experience with Mason Rudolph, of course, but it is true that he isn’t getting that live practice with the other quarterbacks.