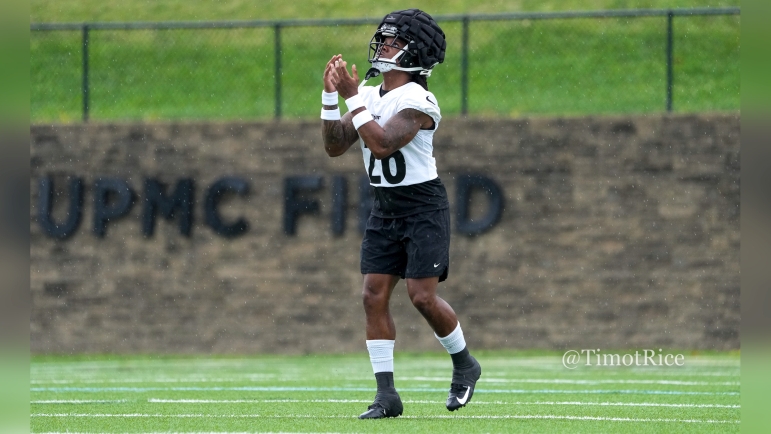 Through two full seasons in the NFL, former fourth-round pick Anthony McFarland Jr. hasn’t shown much of anything to warrant a roster spot with the Pittsburgh Steelers.

As a rookie, McFarland gained just 167 yards on 39 touches as a reserve running back, gaining just four total first downs in those 39 touches on offense. Then, in 2021 McFarland hurt his knee, missed a bunch of time, and then struggled to get a helmet on game days due to COVID issues, ultimately gaining just three yards on three carries and added one catch for 11 yards in limited action.

With his back up against the wall after two disappointing seasons, McFarland has responded well so far in training camp at Saint Vincent College in Latrobe. He’s been able to showcase his speed and versatility overall, and has really inserted himself into the discussion for the second or third running back role on the roster behind second-year star Najee Harris.

According to Steelers Depot’s Alex Kozora, McFarland is pushing himself closer to the inside of the roster bubble, rather than the outside that he entered training camp at. He’s made some impressive plays as a receiver in 1-on-1 drills and team situations, and has flashed a bit as a runner, leading camp in yards per carry average, per Kozora’s charting.

It all comes down to his performance in games though, which is an area McFarland, under second-year offensive coordinator Matt Canada, really needs to emerge. The familiarity in the system under Canada is there, considering McFarland’s breakout occurred when Canada was at Maryland with him.

The third-year running back will get his shot to show what he can do starting Saturday night at Acrisure Stadium in the preseason opener for the two teams, starting at 7 p.m. Former Steelers offensive lineman Max Starks, appearing on the exclusive look inside training camp of the Steelers via the Steelers’ official YouTube page Thursday, stated that he’s looking forward to seeing what McFarland can bring to the table this year in what could very well be a showcase game for him on Saturday night.

“I think he fits very well in this, and I think he’s gonna get showcased on Saturday night. We’re gonna get to see what Anthony McFarland can truly bring to this team with a year under his belt,” Starks said Thursday, according to video via the Steelers’ official YouTube page. “And Jaylen Warren, I think those are my top two. I think they provide enough difference but yet similar to run what Najee is good at to do it in a different way that adds the extra dimension.”

Saturday night’s matchup with the Seahawks very well could be a showcase game for McFarland with Harris unlikely to play due to the lingering foot issue he’s been dealing with. Without Harris in the lineup, at least early, those reps and touches will fall to the likes of Benny Snell, McFarland, Warren, Mataeo Durant and Master Teague III.

McFarland has the most to gain here, in my opinion, even above the three undrafted guys in Warren, Durant and Teague. With a strong showing in a real game situation, McFarland could solidify his spot on the 53-man roster overall. A poor showing could push onto the wrong side of the bubble though, so it’s a pivotal game in the preseasons for the third-year running back.

Hopefully he’ll show signs of what made the Steelers draft him in the first place, which we haven’t seen since he came out of Maryland.