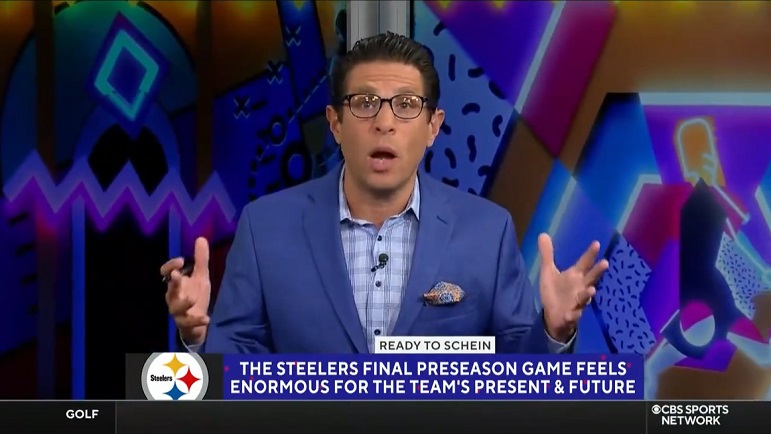 After an offseason with an unusually high degree of turnover for the Pittsburgh Steelers, the 2022 team is a mystery. CBS Sports Network TV Sportscaster Adam Schein weighed in on the team’s quarterback race, and painted an optimistic picture for the them.

Sunday the @steelers take on the Lions on @NFLonCBS and what does @AdamSchein think? ⬇️

"[It] feels rather gigantic for the Steelers season and future." pic.twitter.com/utMJCDqoUm

“Here’s the good news, both options [quarterbacks Mitchell Trubisky and Kenny Pickett], better than [Ben] Roethlisberger over the last two years,” Schein said regarding the team’s quarterback race on his show Time To Schein Friday. “This is exciting, Ben Roethlisberger was holding Pittsburgh back. It’s also exciting, at the end of the day, all [Head Coach] Mike Tomlin does is win. Every year he’s coached the Steelers, the team has been above .500. I’m telling you right here right now, the Steelers will be better than you think.”

As much as 18-year, two-time Super Bowl Champion quarterback Ben Roethlisberger is beloved among Steelers Nation, it is realistic to expect a jump in play at the position from whoever wins the quarterback race. According to Pro Football Focus, Roethlisberger’s PFF grade in 2021 ranked second-to-last in the NFL for passing grade and expected points added per play. The quick passing game that the team employed with Roethlisberger, while initially successful in 2020, did not yield much results. Of course, Roethlisberger’s natural decline in athleticism did not help either.

It is safe to say that the Steelers have been counted out by many for playoff contention this season. After all, neither the reigning AFC Champion Cincinnati Bengals nor the formidable Baltimore Ravens are going anywhere. Moreover, the AFC is filled with talent and elite quarterback play, making the playoff picture unusually competitive. Tomlin being the team’s head coach certainly helps, but it will remain to be seen how much.

“There’s no doubt in my minds that Tomlin wants to go with the veteran,” Schein continued regarding the quarterback race. “I love the Trubisky signing, honestly, with Tomlin, with the weapons. I think he can thrive in Pittsburgh, but if the first round quarterback at the University of Pittsburgh star [Pickett] outplays him again, that’s gonna become the only choice. Sunday on CBS [the preseason finale against the Detroit Lions] feels rather gigantic for the Steeler season and future.”

Indeed, this quarterback race will have a vital impact on the 2022 Steelers and moving forward. As of now, all signs point to Trubisky starting. From Tomlin endorsing Trubisky to his starting in the preseason finale, it is hard to have any doubt that Tomlin likely wants to go with the veteran, as Schein pointed out. That being said, there is one preseason game left, and anything can happen.

The narrative Schein is painting may not be unreasonable at all. That is, the expected jump in quarterback play from 2021, regardless of who it comes from, may just be enough for the Steelers to be better than many anticipate. After all, the 2021 Steelers made the playoffs with a bottom four run offense. With the drafting of receivers Calvin Austin III and George Pickens as well as key free agency depth additions, this is a revamped receiving core, and will help whoever plays quarterback immensely. Last season, the team’s primary return man Ray-Ray McCloud played many snaps at the slot to replace JuJu Smith-Schuster, a role he was ill-equipped for. Additionally, the Steelers offense will now have the added facet of quarterback mobility, which Tomlin has been on record saying he’d prefer.

All in all, if the Steelers defense plays like the elite unit it has the talent to, an improvement in quarterback play may wind up being enough for this team to be competitive.