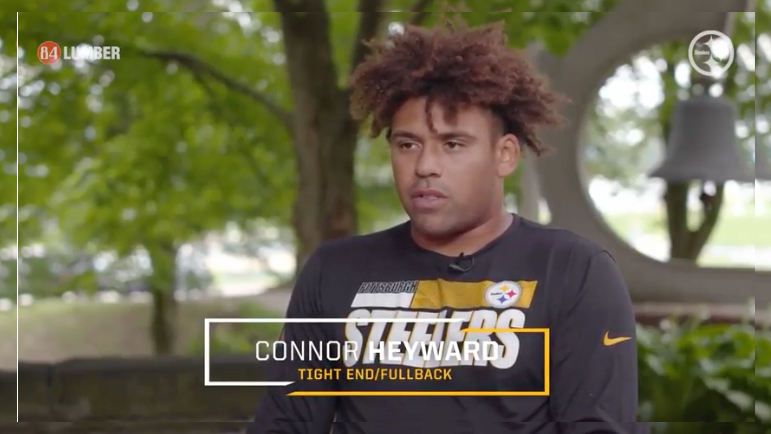 Much of the attention coming out of last Saturday’s preseason game against the Seattle Seahawks at Acrisure Stadium centered on rookies Kenny Pickett and George Pickens for the Pittsburgh Steelers in the 32-25 win. One rookie that had a relatively large impact overall though in multiple phases of the game was rookie tight end Connor Heyward.

He flew under the radar in the win, much like he did throughout his college career at Michigan State, showing he was a true football player that could contribute in a positive way towards winning football. Coming out of Saturday’s win over the Seahawks, Heyward earned quite a bit of praise for his play on offense and on special teams, but as his own hardest critic, Heyward saw some “good, bad, ugly” on tape coming out of his first NFL action.

Heyward, a sixth-round pick in the 2022 NFL Draft, hauled in two passes for 23 yards offensively and added two tackles on special teams, not to mention a two-point conversion on a throw from Pickett that gave the Steelers an eight-point lead early in the second half. Still, Heyward saw some things to improve on within his game, he said during a 1-on-1 sit-down with Steelers.com’s Missi Matthews that posted to the team’s website Saturday morning.

“There was good, bad, ugly. A lot of stuff to learn on,” Heyward said to Matthews, according to video via Steelers.com. “A lot of stuff and different looks and different things that I might have not seen in practice. But,  overall I think I was prepared well with Pat [Freiermuth], Zach [Gentry], and then Coach Fredo [tight ends coach Alfredo Roberts] helping me out a lot. Without them I wouldn’t have been able to be successful on a lot of plays, and the plays that I didn’t do so well on, there’s a lot of teach-tape that we can go back and look up on. A lot of stuff was just about the details.

“…I wouldn’t say there was really much ugly, but I’m always just hard on myself,” Heyward added. “I always just try to strive to be my best every play.”

Overall, Heyward had a strong game in his NFL debut. He was impactful on special teams with the two tackles on kick coverage, which drew praise from head coach Mike Tomlin. He also had the leaping catch across the middle for 16 yards on a throw from Mitch Trubisky, and later added a seven-yard catch-and-run on a swing pass from Mason Rudolph to make an impact offensively.

However, Heyward did have a false start penalty in the win in the second quarter that drew the ire of not only himself, but older brother Cam Heyward on the sideline.

Still, there was plenty to be excited about with Heyward. He made his mark on special teams, was consistent offensively and really showed off his true talents as a football player that can wear multiple hats, hold down a roster spot and really contribute towards winning football. That’s exactly what the Steelers were aiming for when they selected him in the sixth round at No. 208 overall.

‘I Couldn’t Be Prouder For That Dude’: Cam Heyward Shows Some Brotherly Love For Connor Heyward’s Debut