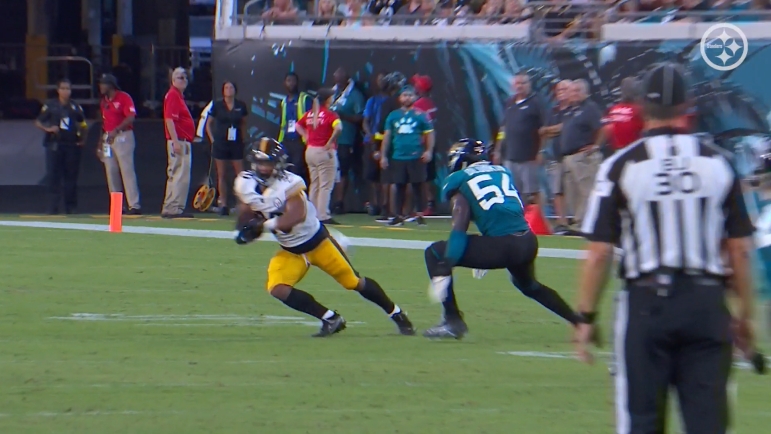 Question: How close is Jaylen Warren to securing a roster spot?

I’m not quite sure we can go as far as saying that rookie running back Jaylen Warren was a ‘camp phenom’ in Latrobe this year. I’m also not sure we can’t. But not all phenoms find their way onto the 53-man roster. Warren has a fair chance of doing that.

And so the inevitable question is, how close is he to securing a spot on the 53-man roster? Najee Harris is obviously set in stone at the top of the running back depth chart. Benny Snell Jr. feels very likely to obtain another one, though without 100 percent certitude.

Then the next question is, will the Steelers keep three running backs or four? It very likely will be three, but they have kept four, plus a fullback and three tight ends, as recently as last season. So if they only keep one more, then Warren is competing with Anthony McFarland Jr. and Mataeo Durant (and Max Borghi) for the final running back roster spot.

I personally have him in the lead. I think it’s rather clear that the Steelers like a lot of things about him. But ball security can be a quick death sentence for a fringe running back. The number one job of a running back is to maintain possession of the football more than anything else, and he has given the coaching staff reason to question how consistently he can do that.

Outside of that not insignificant issue, however, he has displayed the makings of a rather well-rounded skill set, with the ability to create yardage, some solid receiving skills, including an aptitude for gaining yards after the catch, a willingness and ability to block in pass protection as well as the capability of diagnosing a blitz, and the drive to not only participate but succeed on special teams.

In other words, there is a lot to like about his upside. But will he be on the opening day roster? I say yes, but I don’t make the calls. And if he has a bad game on Sunday, he could jeopardize his position.