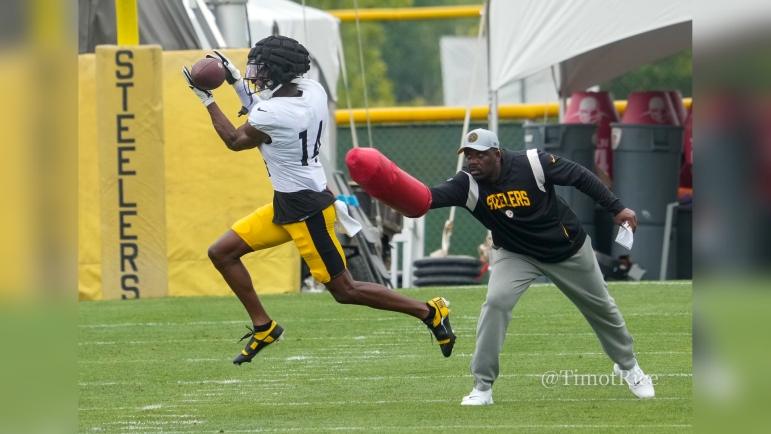 Reasoning: The rookie second-round receiver has been drawing attention for the skills that he has shown thus far in the Steelers’ training camp practices of the past two weeks, garnering press not just from members of the local media, but the national media as well.

The Steelers likely thought they struck it big when they had the opportunity to draft George Pickens in the second round back in April. A very physically talented player, he was available so relatively late in the draft due primarily questions over the state of his injured knee, as well as some minor, quite frankly overblown, concerns about his maturity.

The Georgia product, while not flawless, has displayed his first-round talent throughout the first two weeks of training camp, with catches worthy of the highlight reel being a staple of every drill and scrimmage in which he takes part.

Of course, translating that dynamism from the practice field to the stadiums is the important next step, and the Steelers will get a chance to get into that venue shortly, during which Pickens is likely to see quite a bit of playing time, especially as the coaching staff looks to evaluate its quarterbacks.

Listed as a starter among three wide receivers on the team’s first official depth chart, head coach Mike Tomlin blew off suggestions that his status there was based on anything but obligation when asked if it was a reflection of the work he had done in training camp.

Still, as he has often done in the past, he could have easily listed a veteran, like Anthony Miller or Miles Boykin, ahead of him as the third receiver in the starting lineup, but he didn’t. Does that mean anything? Only Tomlin truly knows, but then again, he did also list T.D. Moultry as an inside linebacker, so one can certainly question how much effort he put into it.

Be that as it may, Pickens’ play speaks for itself, and it would take some convincing for me to believe that he is not going to open the season as the number three receiver provided that he continues on the trajectory he has set out on these past two weeks.