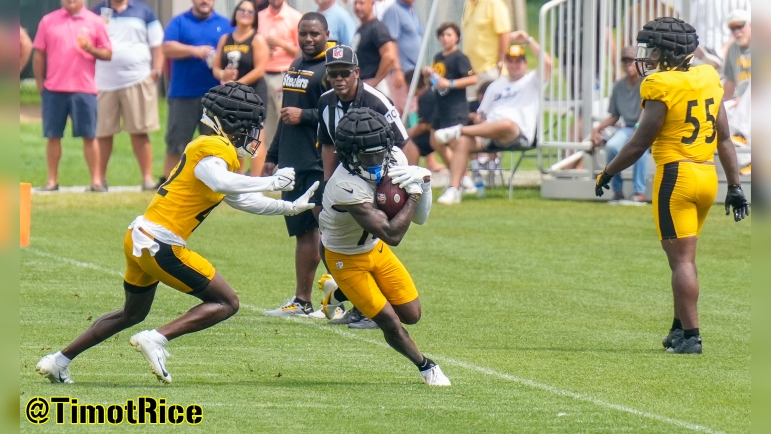 Reasoning: The fourth-year veteran wide receiver got himself paid last week, and subsequently returned to the practice field on a full-time basis, where he quickly began to re-assert the sort of skillset that coaxed a substantial contract out of the Steelers’ newly reworked front office.

Entering training camp, the prevailing perception was that there was no way in hell the Steelers were going to pay Diontae Johnson. Reports varied wildly, but many indicated that the team wasn’t even talking to the wide receiver’s representatives about a new contract.

Obviously, they started talking at some point, and they got a deal done, likely one that was a compromise between financial compensation, guarantees, and length, as he was only extended for two seasons, allowing him the chance to hit the open market, potentially, in 2025.

So it’s certainly nice for him to have gotten paid, but more importantly, now equipped with a new contract, he was able to get back to focusing on how he earned that contract in the first place, getting right back out onto the practice field.

Already working on a limited basis in individual drills, Johnson immediately hopped back into scrimmage sessions and became an instant weapon for the Steelers’ trio of quarterbacks vying for the starting job, all of whom will benefit from having him.

One of the game’s top route-runners today, and elite in creating separation, the former third-round draft pick is coming off of his first 100-catch season, as well as his first 1,000-yard season, making the Pro Bowl as an alternate.

While his game is not without flaws, the primary objection—drops—gets routinely overblown, as sentiment likely echoed by the front office that just paid him handsomely, even if not at the top of the market. He has gotten better every year, and I expect the 2022 season to be his best yet.