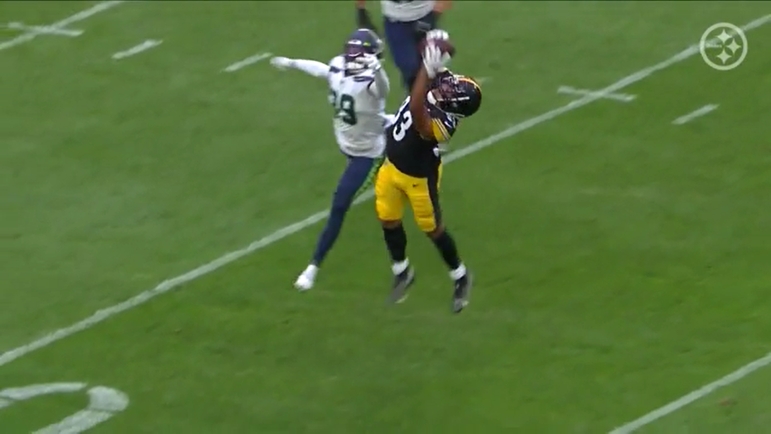 Reasoning: One of the biggest risers throughout training camp, I would argue, was rookie Connor Heyward, who justified his draft positioning and quieted a lot of the doubters who insisted that the Steelers only drafted him for Cameron’s benefit. While carving his teeth on special teams—which he will do well—he also demonstrated that his hands are no joke. He’s still not tall, and still not a running back, but he’ll run routes and catch passes and throw some blocks. And play more than Derek Watt on offense.

The Steelers’ decision to use their sixth-round pick on Connor Heyward way back in April was met with, let’s say, mixed reactions. While I don’t think there was much criticism for adding another brother on the roster, there was widespread insistence that he could have been had as a free agent after the draft.

We’ll never know that now, but it’s no longer material, because he’s here, and he’s going to occupy the third tight end roster spot, whether he’s actually a tight end or not (he’s not). But he’ll do some tight end-like things while developing into a core special-teamer.

Fans don’t like to talk about special-teamers because many—perhaps most—view them as wastes of roster spots. And truth be told, we can’t really buy into Connor as an offensive contributor until we actually see it, because frankly, coaches are always more than happy to talk about how Derek Watt can fit on offense but he never plays—except in the preseason.

But Watt was always a fullback. He had 43 touches in four years at Wisconsin. Connor Heyward is a skill position player with more than 300 collegiate touches. He caught 35 passes for 326 yards and two scores last year after converting to more of an h-back role.

And he showed what he can do during the preseason. He made a couple of nice catches, including one that showed his ability to go up and get the ball. He was used as a move blocker throughout and showed some propensity for that. But most of all, he showed that he has the want-to and the ability to be successful on special teams. You think you liked Roosevelt Nix? Connor isn’t going to smash people as hard, but you’re going to love him.