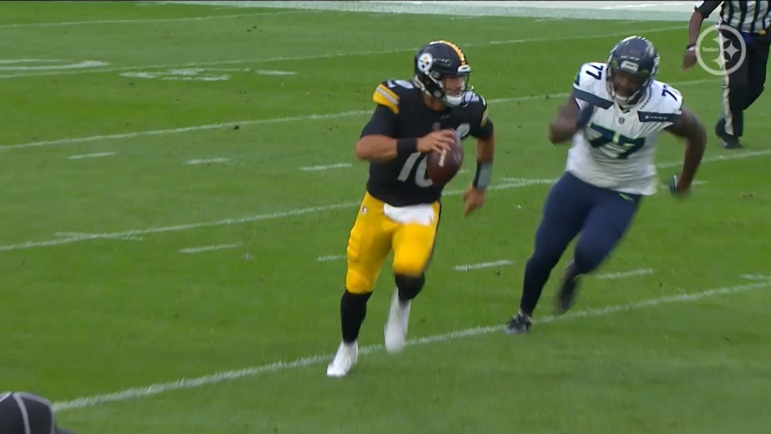 Reasoning: The veteran quarterback led a successful first-quarter Steelers offense that culminated in an opening-drive score, something that has been sorely lacking in recent years. While not without its faults, and against a limited body of work, Trubisky displayed some meaningful starter traits and a glimpse into what Matt Canada’s offense can look like with a more mobile quarterback.

Though he did get to work with the first-team offensive line, the only ‘starter’ Mitch Trubisky had available to him at the skill positions was rookie wide receiver George Pickens. Now, admittedly, that’s quickly becoming a welcome inclusion, the fact that all of Najee Harris, Diontae Johnson, Chase Claypool, Pat Freiermuth, and Zach Gentry were absent at the skill positions has to be noted while judging Trubisky’s play.

Down two wide receivers, he was able to find Gunner Olszewski for multiple receptions, including a touchdown, getting wide open for his quarterback. Down two tight ends, he worked with Connor Heyward, who made a tough catch in traffic for a 16-yard biscuit. And he benefitted from the rushing services of Anthony McFarland.

This is all to say that he was able to command the offense with effectiveness. He looked like he fit, he belonged, while he was under center. He displayed leadership qualities and an ability to execute the plays and direct traffic in the process.

After the snap, there were probably a couple of throws that he might want back, but overall, he did his job, and got the ball where it needed to be. He just missed one big play off of a scramble that resulted in one of his three incompletions.

We will presumably get a longer look at him running the show over the course of the final two preseason games as we get closer and closer to regular season, and we should expect to see gradual improvement. Is he going to look like Patrick Mahomes? No. But do a lot of people feel better about him as a starter this year after last night? I would guess yes.