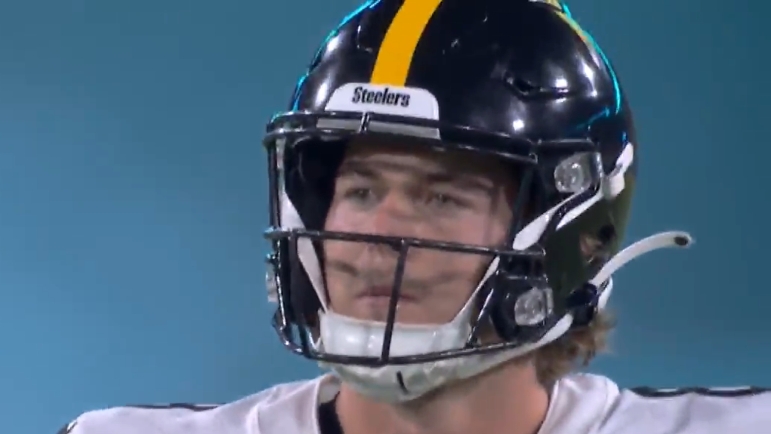 Reasoning: On a night in which it was difficult for the Steelers’ quarterbacks to look good, Kenny Pickett managed that as well as could be expected, and certainly looked the best of the three who played on the night, despite receiving the least amount of playing time.

If the manner in which the Steelers have managed their snap distribution at the quarterback position this preseason tells us anything, it’s that Mitch Trubisky is the starter, unless Kenny Pickett plays stellar football and Trubisky notably underwhelms.

Trubisky is perhaps underwhelming, though not notably so. Pickett hasn’t been quite spectacular, but he’s been good, perhaps better than expected. That’s probably not going to be enough to change who opens the season under center, unless Pickett gets all of the first half next week and blows the roof off, but he has shown that his time is coming sooner rather than later.

Pickett got all of eight plays last night, excluding penalties. Eight plays, albeit across two drives, spanning only about five and a half minutes of game time between his first snap at 6:06 in the second quarter to his last at 0:23. That’s all he played.

But he looked comfortable when he did, and he completed all six targeted pass attempts (with one incompletion as a spike), throwing for 76 yards and a touchdown to running back Benny Snell Jr., a pass in the flat that was only required because offsetting penalties negated a nice touchdown pass to Diontae Johnson one snap earlier.

As many have already noted, the rookie quarterback now has as many touchdowns as incompletions thrown thus far across two preseason games. Now, we shouldn’t read so much into the numbers, or even the performance itself, understanding the limited nature of what we’re seeing in comparison to what would be required of him in the regular season.

But almost all of those who came into this preseason not anticipating that Pickett would surely be The Next Great One have had to have come away from these past two games feeling better about his near future than they did going in. It’s been promising, without question.