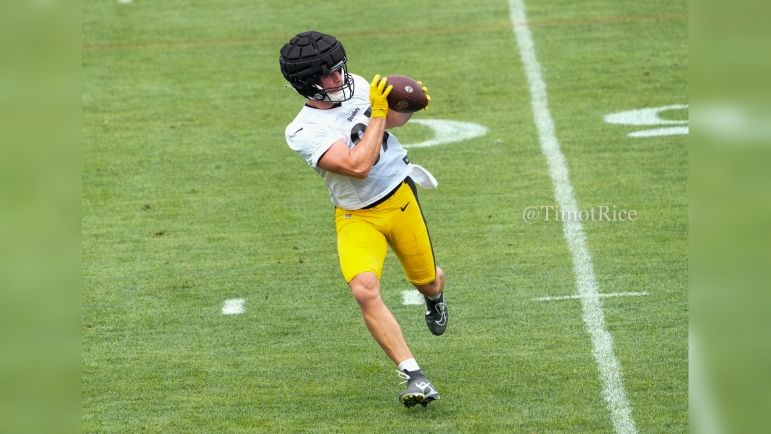 Drafting a prospect who is not a finished product, who doesn’t have a lot of experience at the position he’s being drafted to play, is always a gamble, no matter where it occurs in the draft. The Pittsburgh Steelers understood that tight end Zach Gentry would need time to develop into the role that they wanted him to execute when they drafted him in the fifth round in 2019.

While he was largely quiet during his first two seasons, only playing, or even dressing, when there were injuries, he wasn’t static. He was growing, and he showed that beginning last season, becoming the team’s primary tight end. Now firmly entrenched as the number two, the Steelers expect even more from him this season.

“Zach has been a guy in development since he’s been here. It started first with his body”, head coach Mike Tomlin said of the fourth-year tight end following today’s practice. “He has really put on some weight and things of that nature, and really embraced the role that he’s in the process of carving out for himself. It’s just been a nice, natural maturation process over the time that he’s been here, and it’s reasonable to expect it to continue. He’s been doing a good job”.

He and 2021 second-round draft pick Pat Freiermuth became fast friends last season, and they are looking to form one of the top tight end tandems in the NFL this year. Freiermuth had a successful rookie campaign that saw him score seven times, while Gentry established himself as a legitimate blocking tight end.

But Freiermuth is looking to solidify his role as a blocker, and Gentry is hoping to start contributing more in the receiving game going forward. The more meaningfully versatile their skillsets are, the more the team can justify having them both on the field and utilizing the ambiguity that 12 personnel presents.

For his part, Gentry made a nice grab working against athletic inside linebacker Myles Jack during scrimmage drills during today’s practice, and hauling in some quality catches wasn’t beyond him last year, either.

In fact, when he came out of college, he was regarded as much more of a receiving prospect at tight end rather than the in-line blocker that he has become. Much like Matt Spaeth, however, he embraced the process of transforming his body and bringing that mindset to the role.

But the coaching staff appears to know that there is more that they can get out of Gentry, and they are in the process of putting that in motion. The biggest hurdle may simply be finding ways to get everybody on the field, with the depth that they appear to have at wide receiver. George Pickens, their second-round pick this year, looks like he could have an impact similar to last year’s top picks.