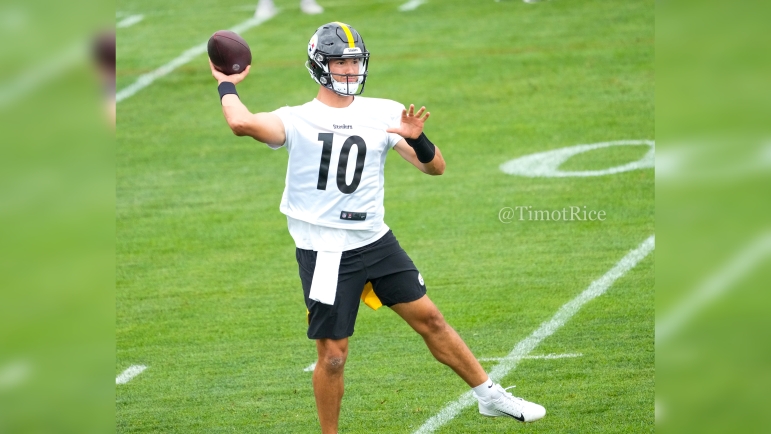 For the first time in 18 seasons, there will be a different quarterback under center other than “Big Ben” Roethlisberger. The team’s first-round pick in the acclaimed ‘04 draft, which is arguably one of, if not the, top QB drafts in history, Roethlisberger went on to shatter virtually every team passing record that existed. More importantly, he led the team to three trips to the Super Bowl, capturing two Lombardi Trophies to add to an already full trophy case.

After riding off into the retirement sunset in January following the team’s 41-21 blowout loss to Patrick Mahomes and the perennially-contending Chiefs, the team’s front office went on-record stating they needed more mobility at the position. It acted swiftly, signing Bears’ cast-off and former #2 overall pick Mitch Trubisky, who qualifies in the mobility department with 4.67 speed. They also didn’t want to rest on their laurels, spending their first-round pick in April on hometown prodigy Kenny Pickett, a Heisman finalist who shattered most of Dan Marino’s school records while at Pitt.

Earlier today, famed sportswriter Peter King spoke from the sprawling hills of Latrobe, PA at Steelers training camp, as he was pressed about the highly-anticipated QB controversy between Trubisky and Pickett. Throughout the duration of OTA’s and thus far in camp, Trubisky’s run the majority of first-team reps, and King doesn’t see that changing.

“Mitchell the, I call him the incumbent, even though he’s never started a game here, he basically has been told, ‘This job is yours to lose’ in essence,” King said, according to the NBC Sports Twitter page.

In 15 years as Steelers head coach, Mike Tomlin has never had a losing season.

Hear from @peter_king about the three things he learned from his talks with Tomlin at Steelers training camp.@AdvanceAuto pic.twitter.com/50kI6oG8PZ

The pecking order thus far has seen veteran Mason Rudolph, much to the chagrin of the fan base, running with the second team. And from camp reports thus far, he’s looked particularly solid. However the preseason is a totally different animal, as you’re no longer competing from defenders with whom you get a feel for day in and day out but instead, going against defenders eager to rip your head off. Pickett has been circling the drain thus far as he’s been cleaning up scraps, gaining reps with the third team. But if we can simply look at the two guys’ past histories in front of him on the depth chart, he could skyrocket up the depth chart in short order.

“That’s how they’re gonna run it I think, through most of training camp,” King said. “And I think it’s going to be Trubisky’s job to lose.”

Trubisky might be able to revive a once promising career, much like Ryan Tannehill did in Tennessee. However, the two QBs drafted right behind him in ‘17 in Patrick Mahomes and Deshaun Watson have gone on to experience much more successful careers, due in large part to Trubisky’s turnover woes. Turnover issues were coincidentally a big part in the play of Rudolph in seasons past. If those issues again rear their head in Pittsburgh, odds are the coaching staff won’t hesitate to look to the future, and insert Pickett into the lineup, in short order.