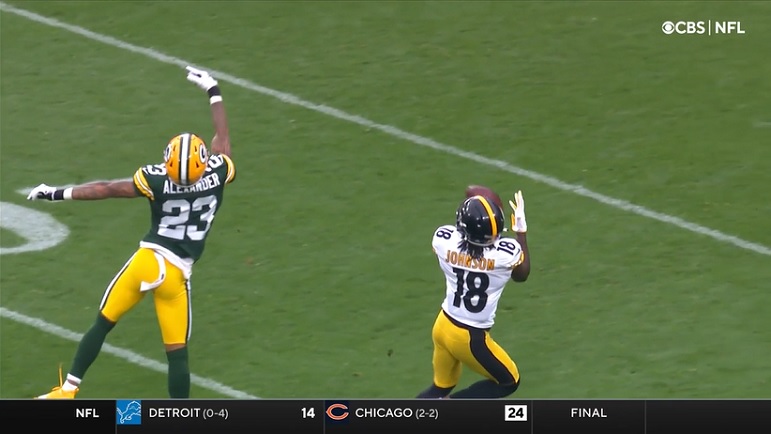 With the contract extension of three years, $71 million now officially signed, sealed and delivered between the Washington Commanders and standout wide receiver Terry McLaurin, all eyes shift to the Steel City, where the Pittsburgh Steelers and wide receiver Diontae Johnson are coming into the final season together under contract.

Johnson would like a contract extension in Pittsburgh, one that pays him like the top receiver in football. The Steelers would like to extend Johnson, based on all reports regarding the situation. But the Steelers likely won’t dole out top dollar to Johnson, considering their history at finding standout wide receiver talent through the draft.

According to The Athletic’s Mark Kaboly in a recent mailbag post on The Athletic Tuesday morning, the longtime Steelers’ beat reporter believes that the Steelers and Johnson won’t come to an agreement before the start of the season, allowing the standout fourth-year receiver to hit the open market in free agency next offseason, where he’ll get the top dollar he’s seeking, albeit from an outside organization.

Kaboly even dropped an interesting prediction for where Johnson lands, and the type of money he’ll be looking at.

Responding to a question from a reader named Kyle H., Kaboly stated he believes that the Steelers will offer Johnson a deal they believe is fair, but it won’t be close to the $20 million a year Johnson could be seeking.

“They aren’t offering him anything near McLaurin or anybody else that got more than $20 million per year,” Kaboly writes in his mailbag. “They will offer him something, and it won’t be what he thinks he can get on the market, and he will get paid next year somewhere else. That’s the way I see it working out now. Spotrac projects his market value at $22 million per year. The Steelers aren’t paying a receiver $22 million per year.”

Though the Steelers do have cap space moving forward following the retirement of quarterback Ben Roethlisberger, they’re unlikely to hand out a large price tag like that at the receiver position, especially as the game moves to more of a passing league overall, making the receiver position relatively fungible, much like the running back position.

More and more high-level talent at the receiver position is coming out of the college game, which makes it relatively easier and much more possible for teams to land significant factors later in the draft, and at a team-friendly cost. That’s largely why the Steelers won’t shell out significant money at the position. Of course, Johnson could agree to an Antonio Brown-like extension to stay in Pittsburgh, where he’s clearly the top dog at the position. Chances of that happening in today’s NFL are very slim though, to be honest.

Should Johnson hit the open market like Kaboly predicts, he’ll have plenty of suitors. Where he lands, according to Kaboly’s prediction?

The Green Bay Packers on a four-year, $93 million deal, averaging roughly $23.25 million per year. Well then.