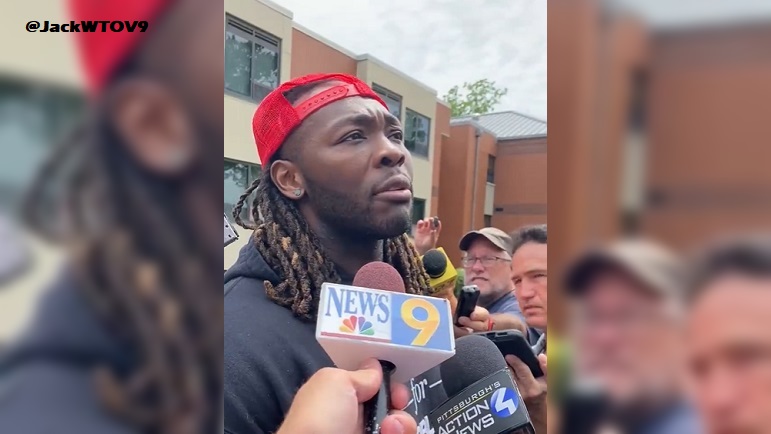 We should find out later on Tuesday if new Pittsburgh Steelers defensive tackle Larry Ogunjobi will be able to start practicing right away during training camp. The reason why there is a chance he won’t be able to is because of the foot surgery he had back in January from which he is still rehabbing from. On Tuesday, Ogunjobi reported to Saint Vincent College in Latrobe for the start of the team’s 2022 training camp and right away he was asked about his foot.

“My foot’s okay, but my biggest thing of going through my process was just that God doesn’t make mistakes,” Ogunjobi said, according to video shot by Jack Hillgrove of WTOV-9. “You know, so everything happens for a reason. You know, I went through my injury. I’ve been bouncing back. I’ve been recovering. I’ve been rehabbing day-by-day so I’m excited once again for the opportunity.”

Here’s the newest member of the defensive line, Larry Ogunjobi. I asked him about the process of getting to know the guys he’ll be playing along side of. @WTOV9 pic.twitter.com/HE473SfT19

Ogunjobi made it sound on Tuesday like he will be eased into work at training camp and that’s not a huge surprise based on an interview he gave a few weeks away. That foot wasn’t fully healed earlier in the offseason, and it caused him to fail a physical with the Chicago Bears after he had agreed to a very lucrative three-year $40.5 million contract. Instead, Ogunjobi wound up waiting until the latter part of June to sign a one-year, $8 million contract with the Steelers.

Should Ogunjobi wind up being placed on the Active/PUP list in the next 24 hours, such a move will prevent him from practicing at the start of training camp. He would, however, be able to resume practicing at any time moving forward as soon as he’s deemed healthy enough to do so. Players must start off training camp on the Active/PUP list to qualify for the Reserve/PUP list at the start of the season, should such a path need to be taken with him.

As for what position Ogunjobi expects to play for the Steelers, he was asked about that on Tuesday as well.

“Defensive tackle, so I’ll be able to move around from the four [technique] to the three [technique], the nose,” Ogunjobi said. “Pretty much everywhere.”

In 2021 with the Cincinnati Bengals, Ogunjobi played in 16 regular season games on his way to registering 49 total tackles, of which 12 resulted in lost yardage. He was credited with seven sacks last season and 16 total quarterback hits in 724 defensive snaps played. In the Bengals playoff win against the Las Vegas Raiders, Ogunjobi suffered his foot injury that landed him on the team’s Reserve/Injured list. That injury required surgery.