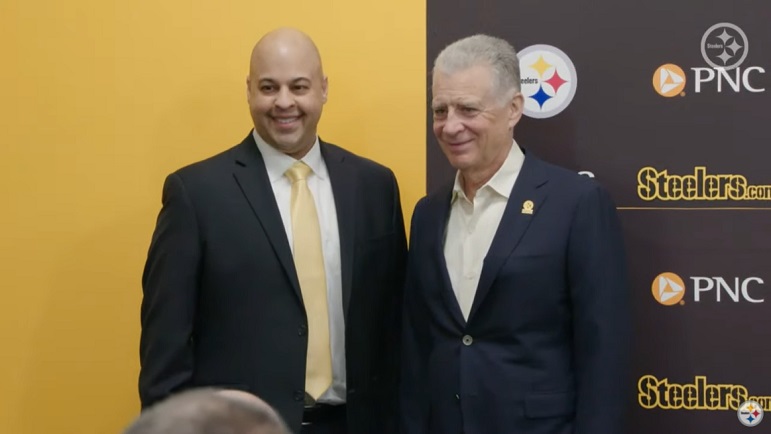 Will the Pittsburgh Steelers regret their 2022 offseason plan this upcoming season? Kristopher Knox of Bleacher Report thinks that will indeed be the case, according to a post he recently wrote.

Knox’s reasoning for listing the Steelers 2022 offseason as potentially being one they will regret centers around him thinking that they are setting up new quarterback Kenny Pickett for a slow start to his NFL career.

“Pittsburgh parted with wide receivers JuJu Smith-Schuster and James Washington, along with guard Trai Turner. It drafted wideouts Calvin Austin III and George Pickens, but it did little to improve an offensive line that was problematic in 2021.

The Steelers surrendered 38 sacks last season while ranking 29th in both rushing yards and yards per carry. Adding Mason Cole and replacing Turner with James Daniels will not suddenly give the Steelers a top-flight unit.

So, Knox doesn’t believe that the Steelers did enough addressing of their offensive line this past offseason. Who does he think they should have gone after instead of, or in addition to, center Mason Cole and guard James Daniels?

“By failing to land players like Terron Armstead and La’el Collins, the Steelers have put themselves in a position where starting Pickett early on probably isn’t best for his development.”

Well, if the Steelers really wanted to sign Terron Armstead, they would have likely needed to best the five-year, $75 million contract he got from the Miami Dolphins, of which $30.12 million is fully guaranteed at signing. Did I mention that Armstead will turn 31 in a few more days? How many of you reading this think that the Steelers should have paid that kind of money to Armstead at his age? Personally, I would have been shocked if that would have happened.

What about La’el Collins, who signed a three-year, $21 million contract with the Cincinnati Bengals this offseason that included $5 million guaranteed? I suppose you can gig the Steelers for not signing him in lieu of re-signing tackle Chukwuma Okorafor. Collins’ history, however, doesn’t scream him being a Steelers-type offseason acquisition. Like with Armstead, it would have been a bit surprising to see the Steelers sign Collins this offseason. I guess that’s what Knox is getting at, however. Let’s see how Collins handles Steelers outside linebacker T.J. Watt this upcoming season.

Moving on from Knox’s thoughts on the Steelers offensive line not being addressed properly this offseason, he also took a shot at the other side of the football as well.

“The fact that Pittsburgh did little to address the league’s worst run defense aside from adding Myles Jack doesn’t help the situation, either. Relying on a stout defense won’t be an option.”

Yeah, Knox is just filling with internet ink here. Jack’s addition at least makes the inside linebacker room better than it was last season. Oh, and I guess Knox missed the Steelers additions of defensive tackle Larry Ogunjobi and cornerback Levi Wallace this offseason. The reason the defense played so poorly in 2021 was mainly due to injuries and the team not having veteran defensive end Stephon Tuitt. In case everyone forgot, Isaiahh Loudermilk played 288 defensive snaps in 2021 and both Henry Mondeaux and Isaiah Buggs each played between 225 and 250 total snaps as well. That certainly doesn’t scream Steel Curtain-like personnel.

Let’s end the analysis of Knox’s analysis with this tasty tidbit:

“Pickett will most likely be learning on the job in 2023, when quarterbacks Joe Burrow, Lamar Jackson and Deshaun Watson could be poised to dominate the division…That puts a serious damper on Pittsburgh’s chances of contending in the near future. The Steelers could be looking at a lost season with [Mitch] Trubisky in 2022 and another lost season with a still-developing Pickett in 2023.”

So, to summarize, Knox theorizes that had the team done more this offseason in free agency that it would have led to Pickett being able to develop more in his 2022 rookie season. Okay, got it. That said, Pickett is still likely to play some in 2022, especially if the Steelers’ season goes south in the second half of it. Had the Steelers went out and added Knox’s deemed better players this offseason, it still likely would have resulted in Pickett playing the same amount of playing time as a rookie. Remember, the Steelers drafted Pickett after they signed Mitch Trubisky in March. In short, the plan from the start seems to have been that Trubisky will be the team’s starting quarterback to at least open the first half of the 2022 season.

Personally, I will be surprised if the Steelers make the playoffs in 2022 as we sit here in the middle of July and that’s regardless of who plays or doesn’t play at quarterback. That said, Trubisky gives the Steelers their best shot at making the playoffs in 2022 just the same. Pickett can still develop as a rookie by watching and perhaps playing some as the season progresses.

Adding players such as Armstead and Collins this offseason would not have sped things up for the Steelers to be a competitor in 2023. Overall Knox’s reasoning seems poorly put together. If anything, the Steelers’ 2022 offseason plan has things looking much brighter for them in 2023, especially on the offensive side of the football.