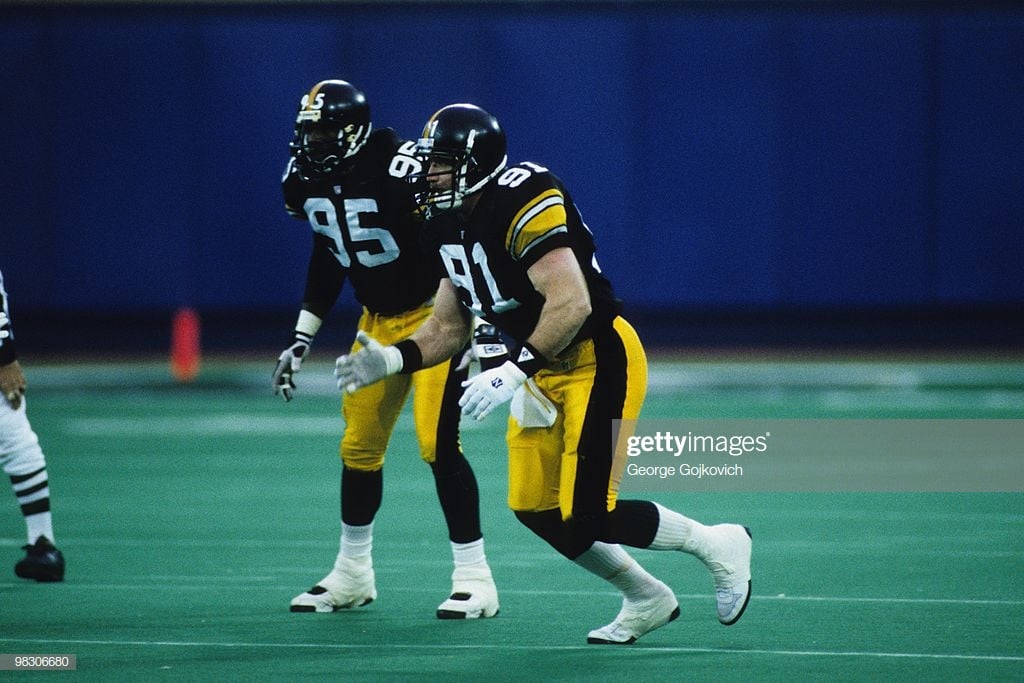 In the height of the Blitzburgh era for the Pittsburgh Steelers in the 1990s, the black and gold had quite the collection of linebackers under head coach Bill Cowher and defensive coordinator Dick LeBeau featuring the likes of Greg Lloyd, Kevin Greene, Chad Brown, Levon Kirkland, Jason Gildon and Jerry Olsavsky, to name a few.

On a defense loaded with talent, key numbers and statistics came easily for the likes of Lloyd, Greene, Brown and Kirkland when on the field. All four were great in their own right, but there was one thing that really drove that group to stardom during the 90s.

It had nothing to do with talent. Instead, according to Lloyd — who appeared on 1010 XL/92.5 Primetime in Jacksonville with former Steelers’ offensive lineman Leon Searcy — the success of the Steelers’ defense in the 90s had everything to do with that group of men being driven to not let each other down, holding each other accountable and doing whatever was necessary to win each rep.

That, back then, was the Steeler way.

“Kevin [Greene] came in, played with us for three years, but it was life changing It was something that we needed at the time,” Lloyd said to Searcy, who called the 90s group one of the top 5 linebacker groups every in the history of the NFL, according to audio via 92.5 FM. “When you think about teams that are going through changes and teams that are going through this and that, we were like maybe one or two players away from going to the super bowl or something like that. Right there.

“So when we got Kevin and we got [running back] John L. Williams and we added [tight end] Jonathan Hayes and some other guys, it was like, ‘okay, we got a bunch of guys that can still play,’ but the leadership is there. And so with that unit that we had, it was we just didn’t wanna let each other down.”

Throughout the early 90s the Steelers were quietly building a monster of a team under new head coach Bill Cowher. The physical rushing attack was there with Barry Foster and Bam Morris, and the defense was becoming a real problem for opposing offenses with Lloyd, Kirkland, Brown, Rod Woodson and Carnell Lake.

“That was the main thing. Kevin wanted to get a sack, every game I wanted one every day, I wanted to get more tackles because Levon wanted to get them,” Lloyd said to Searcy, according to audio via 92.5 FM in Jacksonville. “That’s just kind of how it was, but we played off each other and it was a fun thing. It was not a, ‘oh man, I hate you’ you know, hater-nation kind of thing. It was like, ‘Hey, go get ’em.’

“If I gotta go in there and take on a tackle and a pulling guard and stuff so that you can make that play so you can scrape and make that play, cool. If you don’t make it I’m gonna turn around and go, ‘come on, bud. You’re gonna make me hurt my shoulders. You gotta make that play.’ But that’s how we were, man.”

If you were a football-playing kid in Pittsburgh in the mid-90s, you dreamt of playing defense because of guys like Rod Woodson, Carnell Lake, Levon Kirkland, Greg Lloyd, and yes, Kevin Greene. pic.twitter.com/esQ5VIkRy6