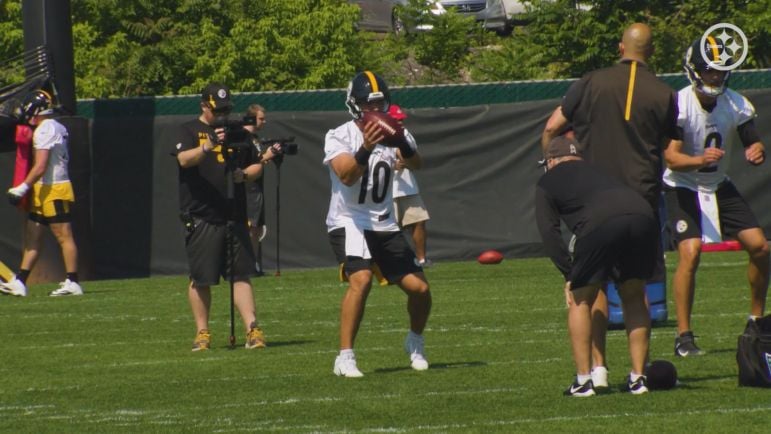 In the 2019 offseason, the Tennessee Titans acquired a struggling Ryan Tannehill from the Miami Dolphins in exchange for nothing more than a fourth-round pick in 2020 and a seventh-round one in 2019. Struggling to live up to his lofty draft status as the eighth overall pick in 2012, a change of scenery was needed for him, and the Titans currently had Marcus Mariota, who wasn’t exactly lighting the world on fire either. A classic buy-low, hope for the best type move that often doesn’t pay off, but every once in awhile, teams may find themselves onto something.

Why am I bringing up this situation? Well, because it’s currently one that the Steelers are in the midst of, as presumed starter Mitch Trubisky is looking to revitalize a once promising career that saw him drafted at #2 overall in 2017, ahead of the likes of Patrick Mahomes and Deshaun Watson. He’ll have to battle it out with first round pick Kenny Pickett for the right to start, but the ingredients are there. And it’s not exactly the first time we’ve seen this scenario play out this way.

There’s a little bit of a precedent when it comes to first-rounders flaming out, especially at the QB position, before tasting success in their next stop. As we all know, some organizations have much more stability, from top to bottom, than places such as Jacksonville or Cleveland. But back to Tannehill, who sported a 42-46 record in his tenure with the Dolphins before getting flipped to Tennessee, as Mariota’s backup.

Since taking over for a faltering Mariota in Week 6 of that 2019 season, he’s won 30 of 43 starts, has been named both a Pro Bowler and the 2019 NFL Comeback Player of Year while also leading the Titans to three postseason berths and a spot in the 2019 AFC Championship Game. Also noteworthy is that in 2019 he was the highest-rated passer in the league, sporting a 117.5 QB rating, 9.6 YPA and a 70.3 completion percentage, all three of which set franchise records. He followed up his successful first season in Nashville with an even more impressive 2020, throwing for 3,819 yards, a career-high 33 touchdowns against only seven picks.

When looking at Trubisky and Tannehill, it’s important to note that both possess outstanding mobility at the position, with Tannehill, a former wide receiver in college, actually besting Trubisky with a 4.58 in the 40 compared to Trubisky’s 4.67. Rush ability is certainly a key element of Tannehill’s game, as he’s great on boot legs and QB roll outs, and has seven touchdowns on the ground in each of the past two seasons. For as maligned as some of Trubisky’ career has been thus far, his mobility was one issue that was never in question, as evidenced by the 421 yards he ran for in the 2018 season, his Pro Bowl season.

Trubisky is certainly a bit away from being handed the 2022 Comeback Player of the Year Award, but it’s definitely within the realm of possibility, as he’s not a bad QB by any means. One footnote when comparing the two is the running game that’s been the backbone of the Titans’ offense has been stellar, led by All-Pro thoroughbred running back Derrick Henry, the 2020 Offensive Player of the Year. The smashmouth offensive identity the Titans employ has meshed perfectly with Tannehill’s skillset, and it’s a blueprint the Steelers should be looking to emulate. Pittsburgh has a tremendous RB of their own in Pro Bowler Najee Harris, a 244-pound hammer who will be looking to become the focal point of an offense shifting from the Ben Roethlisberger-era. An improved offensive line will be vital, but the skill position talents that exist in the Steel City are undeniable.

With OC Matt Canada’s playbook getting a dust-off when it comes to the QB-mobility aspects of it, the places appear to be set for success with Trubisky. As Tannehill has proven, sometimes the grass really is greener on the other side. Let me know if you think the comparisons are warranted in the comment section below.