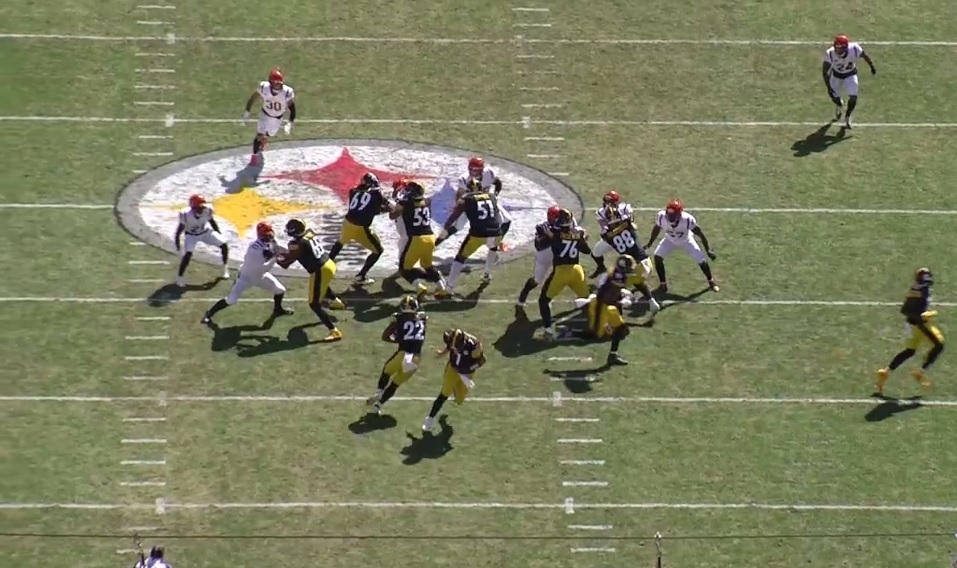 If it felt like the Pittsburgh Steelers ran the ball a lot after a 1st and 10 incompletion, you’d be right. Sharp Football’s Warren Sharp put together a list of the most run and pass happy teams after a first down incompletion, with the Steelers having the ninth-highest run rate at 46%.

To exclude noise based on game circumstance, Sharp used just first half data.

2nd down run rate after an incompletion*

*first half of games

At least the Steelers weren’t anywhere close to the Giants, who ran a whopping 70% of the time. Still, that 46% mark is far from ideal, and plenty of below-average offenses were run-happy in those moments. The Giants, Lions, Football Team/Commanders, Bears, Broncos, and Falcons aren’t company you want to keep. On the other end of the spectrum, high-powered offenses like Tampa Bay, Cincinnati, and Kansas City ran the ball the least.

Of course, there’s a clear line to be drawn between teams who had great quarterbacks and which ones didn’t. That had a large hand in the teams who ran versus the ones who passed the least on second down. But all models show teams should be running on second and long. It would’ve been an especially good idea for Pittsburgh with its inefficient run game that put it into third and long time and time again. Three yards on 2nd and 10 doesn’t do much for an offense.

While I wasn’t able to trim down the data to 2nd and 10 plays after first down incompletions, I do have the Steelers’ data on all 2nd and 10 plays last year. Pittsburgh picked up a first down just 9.1% of the time, 31st in the league, which is no surprise considering they averaged exactly two yards per play, the worst mark in football.

While the Steelers’ offense has received an overhaul this offseason, odds are they’ll remain one of the league leaders in 2nd and 10 runs. Pittsburgh could be even more conservative with either Mitch Trubisky or Kenny Pickett at quarterback and will be committed to the run game, leaning on Najee Harris to shoulder the load in increased fashion, even knowing he was the team’s workhorse back last season. That could keep this offense inefficient, and if the Steelers want to succeed, they’ll have to broaden their horizons instead of running Harris up the middle on second and long.