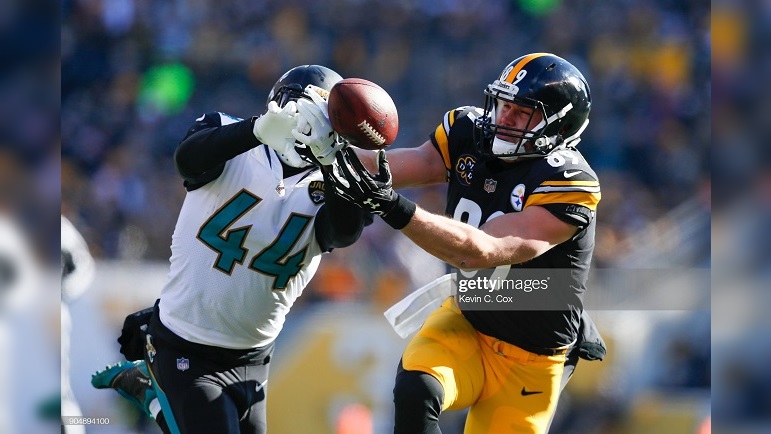 The Pittsburgh Steelers had a busy free agency, including the signing of inside linebacker Myles Jack, and today I wanted to provide some data context to what he provided last season in coverage along with Pittsburgh’s linebackers as well. Let’s get right to it, starting with 2021 coverage snaps and targets to get a gauge of the quantity of plays comparatively. 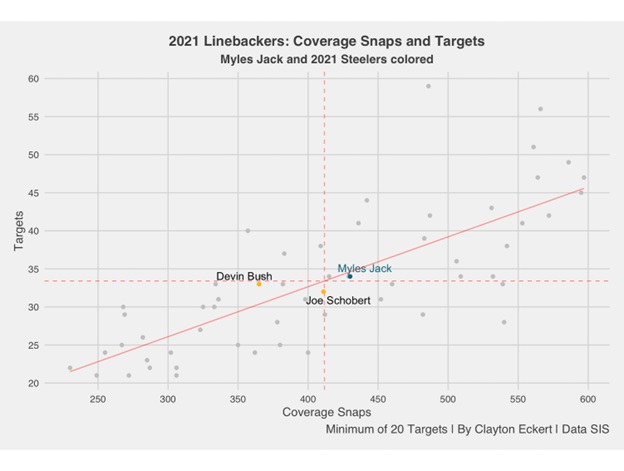 Comparing Jack’s 2021 opportunities in Jacksonville to the NFL and Steelers, we can see he was utilized at an above the mean rate of the 58 players on the graph and targeted more than the 2021 Steelers. According to Sports Info Solutions (SIS), Jack ranked 24th in most coverage snaps and tied for 20th most targeted at the position. 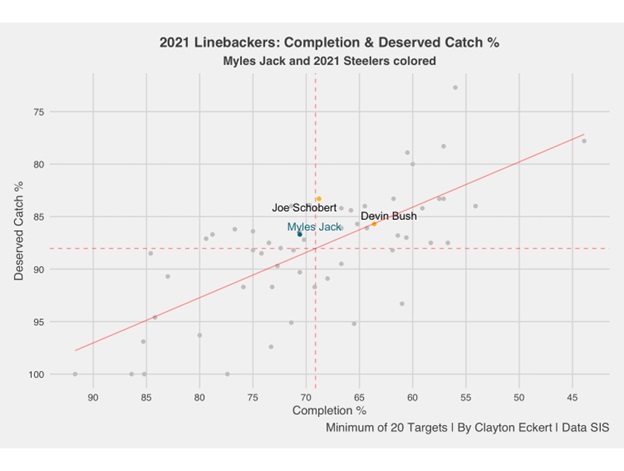 Here we can see an area where the 2021 Steelers linebackers had better marks than Jack, with Devin Bush tying for the 17th lowest completion percentage allowed and Joe Schobert tied for the sixth lowest deserved catch percentage with four other players. In comparison, Jack was below the mean in completion percentage (T-32nd), allowing over 70% of his targets to be completed. His deserved catch percentage (T-25th) encouragingly landed above the mean, but still below the 2021 Steelers.

Next, let’s look at where these targets came with yards per attempt and yards per game: 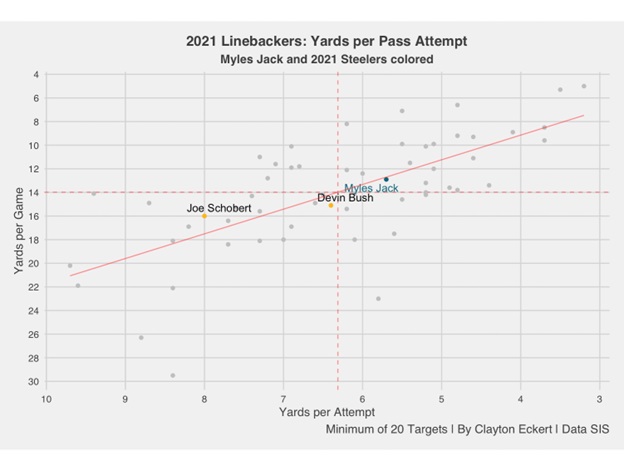 Jack allowed the fewest yards per attempt and per game of the players we’re focused on, as well as being above the mean in both compared to the NFL, which ranked 24th and 25th respectively. Pittsburgh’s linebackers were both below the mean in each regard, with Bush having the better marks, especially in yards per attempt. Schobert’s yards per attempt ranked 49th at the position, and here’s to hoping this is one of the biggest improvements Jack can provide in the black and gold with Schobert out the door.

Another stat that is used often to evaluate defenders in coverage is QBR Against, so let’s see how they fare along with Wins Above Replacement (WAR) which is a points above replacement scale conversion that is based on the scoring environment. 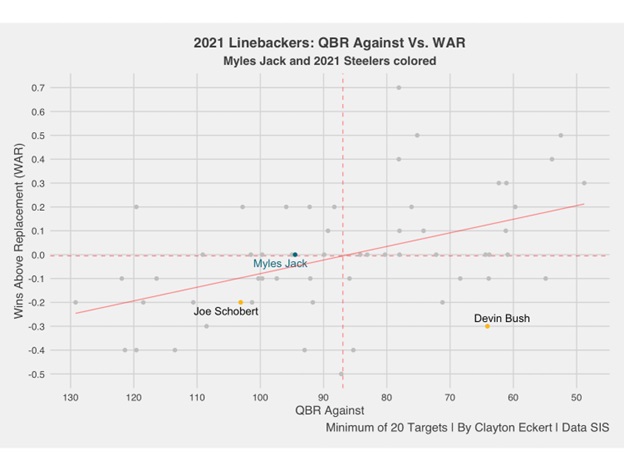 Jack lands right at the mean in WAR. He had the strongest effect on the ultimate goal of winning of the colored players, which is impressive considering Jacksonville’s struggles in 2021, with Pittsburgh’s linebackers both in the negative. Bush fared best in QBR against, ranking 12th across the NFL. While we know he needs a much better 2022 season in many regards, I wanted to close with SIS’s Boom and Bust percentages to get more context of some of his strong coverage results. 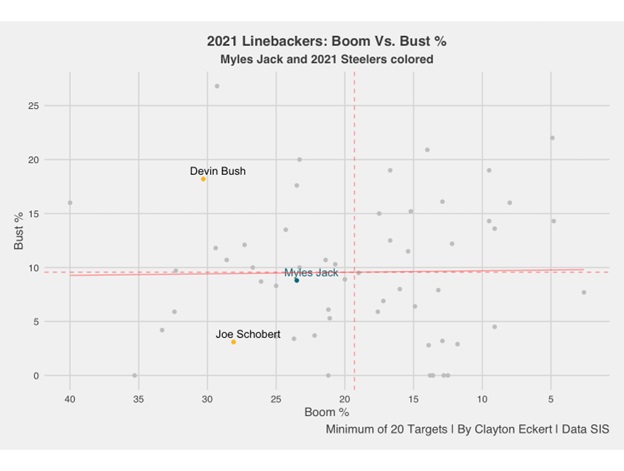 Where Bush fared best in the data was in Bust percentage, meaning he had a high percentage (7th) of plays comparatively that were unsuccessful for the offense. The other side of the coin though was his Boom percentage result, allowing very successful offensive plays at over 30% which ranked 53rd. So, as expected, Bush had the most up and down results which emphasizes the need for steadier play in 2022.

In regards to the data and outlook for 2022, we can see Jack fared better in most aspects than Schobert in coverage. Catch percentages were the one facet the latter fared stronger, but Jack’s better marks in usage, yardage, QBR Against, WAR, and Boom/Bust percentages have me optimistic for an improvement this season. As our own Jonathan Heittritter pointed out recently in this article that hopefully comes to fruition, I concur that Jack should excel in the Steelers defense with stronger talent around him than he had last season as a Jaguar. Here’s to hoping this linebacker pairing of Jack and Bush can have a healthy and strong season, and next article I will take a similar look at them in run defense.