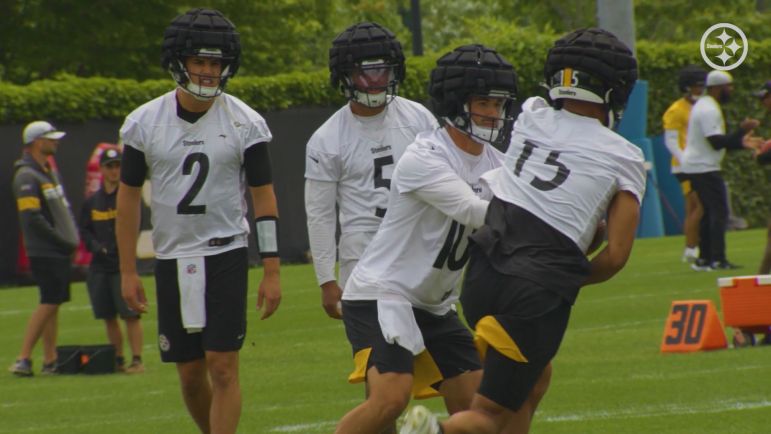 At this point in his career with the Pittsburgh Steelers, it’s fair to say that 2022 seventh-round draft pick Chris Oladokun has become a bit lost in the shuffle at the quarterback position.

Currently, veteran free agent signee Mitch Trubisky, fifth-year quarterback Mason Rudolph, and 2022 first-round draft pick Kenny Pickett are drawing all of the attention at the quarterback position as the Steelers find themselves in a quarterback competition for the first time in 18 years following the retirement of Ben Roethlisberger.

Knowing he’s fourth on the depth chart and in the pecking order for snaps ahead of his first training camp at Saint Vincent College and Chuck Noll Field in Latrobe, Oladokun is focusing on embracing his role with the black and gold in whatever capacity may be, the seventh-round pick told the Pittsburgh Tribune-Review’s Chris Adamski during minicamp in June.

Rookie QB Chris Oladokun Ready To Push For Roster Spot In Camp: ‘I Believe In Myself’ https://t.co/DovKsnaYdL #Steelers pic.twitter.com/Ew4qyiPXdl

“Obviously, we have a very competitive quarterback room,” Oladokun told Adamski during minicamp, according to original reporting from the Tribune-Review. “I look to embrace my role in any capacity, whatever that is, whether I am the first one taking snaps or the last guy on the totem pole.

“However I can make not only the (position) room better but the (whole) team, that’s what I look to do. I’m embracing that role. It’s something that’s going to be important for me heading into this year. You are just personally developing: on the field, off the field and giving yourself the best chance to make the ‘53.’ ”

Oladokun’s road ahead to make the 53-man roster out of training camp is a rough one, with Trubisky, Rudolph (for the time being) and Pickett on the depth chart ahead of him. Add in the fact that he’s a seventh-round draft pick taken just 21 spots from the end of the 2022 NFL Draft and that he was on his third program in college at South Dakota State, the chips are stacked against him.

However, with the athleticism and overall skillset he possesses, Oladokun is a good fit in second-year offensive coordinator Matt Canada’s system, and could force the Steelers’ hand in keeping him as the No. 3 with a strong training camp and preseason, making plays with his arm and legs in limited action.

The problem is, he won’t get much opportunity to be fully prepared for those preseason moments, as reps will be relatively limited for the FCS standout as the fourth-string QB behind the trio. Still, crazier things have happened and the Steelers very clearly believed in him, spending a seventh-round pick on him rather than risking losing him in the undrafted free agent market. He has the right mindset going into his first career training camp.

What the role will be remains to be seen, but he’ll fight tooth and nail to lock down a 53-man roster spot in a hotly-contested quarterback room.