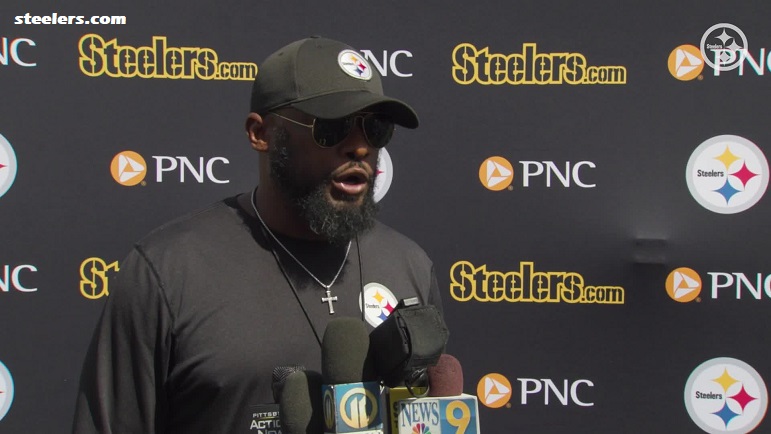 The Pittsburgh Steelers have now wrapped up their fourth training camp practice of 2022 at Saint Vincent College in Latrobe, and after the Saturday session was completed, head coach Mike Tomlin updated the health of his team heading into the team’s first off day on Sunday.

“A couple of injury updates, we talked about [Chase] Claypool last time, went down, wasn’t able to finish practice with a shoulder that can be characterized as day-to-day,” Tomlin said. “Like I mentioned prior to that, Pat Freiermuth has a hamstring that can be characterized as day-to-day. Marcus Allen went down with a hamstring in practice that needs to be evaluated before we describe the extent of that. Like I always mention this time of year, bumps and bruises occur along the way, and it’s an unfortunate component of the game, but what it is an opportunity for others.”

As Tomlin indicated, wide receiver Chase Claypool (shoulder) and tight end Pat Freiermuth (hamstring) were both sidelined on Saturday, and they’re both day-to-day right now. Both were watching practice on the side on Saturday, according to Alex Kozora.

Safety Miles Killebrew (pectoral) remained sidelined on Saturday as well, according to Kozora. It seemed like tight end Connor Heyward (ankle) was dinged up late in practice on Saturday, so we’ll have to see if he’s able to participate on Monday. Cornerback Levi Wallace (illness) was back on Saturday after missing Friday’s practice. Defensive tackle Larry Ogunjobi (foot) remains limited in practice as he continues to be worked into things.

The two other players that sat out Saturday with injuries, safety Minkah Fitzpatrick (wrist) and defensive tackle Tyson Alualu (knee), started off training camp on the Active/NFI and Active/PUP lists, respectively. It sounds like Fitzpatrick continues to make progress on the side, according to Kozora on Saturday. Additionally, wide receiver Diontae Johnson (personal) did not practice during the team portion again on Saturday, and that’s due to his ongoing contract situation. Tomlin would not speculate when Johnson might start practicing fully when asked about him on Saturday.

“I’m not making any guesses about participation. I deal in reality and who we have working and what transpired today. We’ll see what happens as we move forward,” he said.

The Steelers next training camp practice will take place on Monday at Saint Vincent College, and it will be the first time the team works in pads.