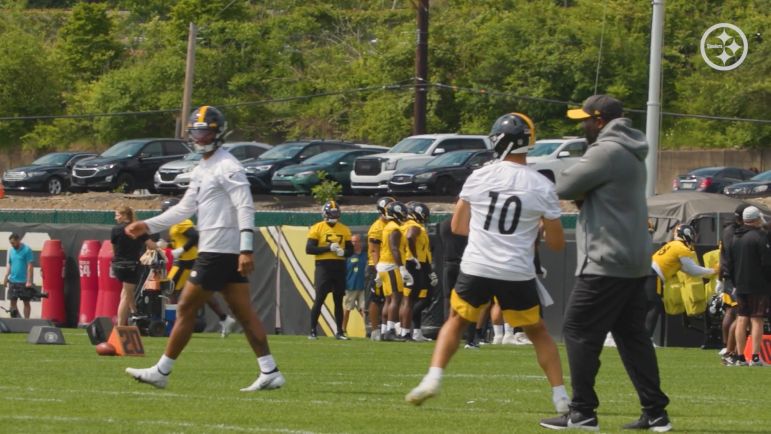 The Pittsburgh Steelers will have a new quarterback in 2022 and as things stand right now that will be Mitch Trubisky, at least to start the season. If Trubisky is indeed the chosen one, he will be tasked with helping the Steelers offense accomplish something in the passing game that has been problematic for the last several seasons and that’s completing a higher percentage of deep balls. With that being my chosen topic on this Wednesday, let’s look at the stats related to deep pass completions dating back to 2017 for not only Trubisky, but the quarterback he’ll be taking over for in Pittsburgh, Ben Roethlisberger.

For starters, let’s clarify that in this stat look that a deep pass is one that flies 20 or more yards in the air past the original line of scrimmage. Additionally, let it be known that I am using Sports Info Solutions as a stat source for this look.

According to SIS, the average completion percentage for all passes of 20 yards or longer during regular season play dating back to 2017 is 36.2%. That percentage includes all such throws and thus attempts by any player, regardless of position, are included.

So, with Roethlisberger knocked out, what about Trubisky and his deep passing stats to date? Well, I’m sad to report that they have only been slightly better than Roethlisberger’s.

Trubisky’s best season to date when it comes to deep passing completion percentage was in 2018 when he completed 22 of 64 such attempts for a 34.4% number. Additionally, from 2017-2021, Trubisky has just a 29.9% completion percentage on all regular season attempts of 20 yards or longer. That ranks him 33rd overall on the previous list of 39 quarterbacks I mentioned and just two spots ahead of Roethlisberger. The player ranked in-between Trubisky and Roethlisberger is none other than Andy Dalton.

There is another stat that is of concern as it relates to Trubisky and the other 39 quarterbacks and that’s the fact that his on-target percentage of 41.3% on deep passes dating back to 2017 is the worst of the group.

So, those are the stats. Those stats, however, do lack quite a bit of context and I’m sure that will be one of the many rebuttals to this study. These stats also do not mean that Trubisky can’t improve now that he’s with the Steelers. Even so, one must wonder how much more he can improve his deep pass stats. Can he at least get to a 36.0% percentage? If he can, that would be the best deep pass completion percentage the Steelers have had since 2016 (38.2%).

Whatever your takeaway is from this deeper stat look, do know that Trubisky’s deep passing stats are certainly worth monitoring throughout the 2022 season. The Steelers deep passing game must improve in 2022 and at the very least, get back to 2016 levels. 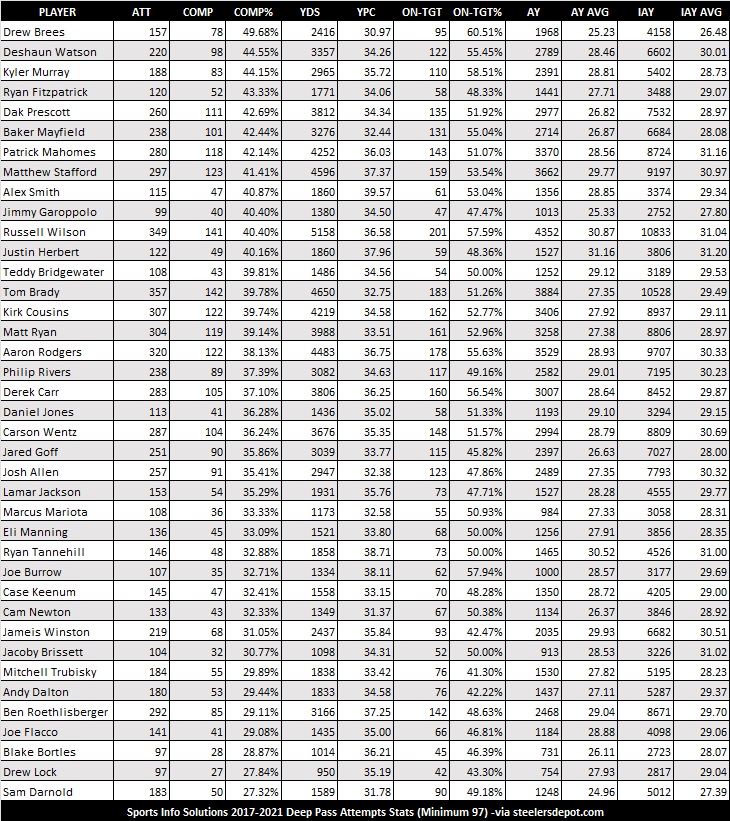