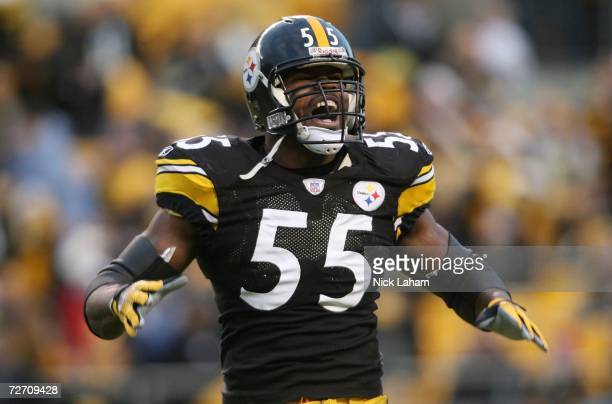 As many of you know, Alex Kozora and I have been conducting a debate series during the offseason, discussing several topics that we can have genuine, good-faith disagreements over on the Pittsburgh Steelers.

Recently over DM, I reached out to Alex proposing the debate of whether-or-not former Steelers OLB James Harrison should be inducted into the Hall of Fame. We both concluded that he should be inducted at some point, leaving us to look for other debate topics.

As a former defensive end/outside linebacker myself in high school, I idolized watching Harrison and his game growing up. However, while Deebo may be my favorite Steeler of all-time, Porter was my “first love” when it came to admiring and studying the OLB position. I vaguely remember watching the Steelers Super Bowl XL victory against the Seattle Seahawks where Porter was the leader of that defense, being the voice as well as the enforcer that you either loved as a Steelers fan or hated as a fan of any other team.

When looking at just stats and accolades alone, Porter has a reasonable case to be at least in consideration. In 188 career games (171 starts) from 1999-2011, Porter has amassed 689 tackles, 124 TFLs, 98 sacks, 25 forced fumbles, ten fumble recoveries, 49 pass deflections, 12 INTS, and three defensive TDs. He is a four-time Pro Bowler, a first team All-Pro in 2002, a Super Bowl Champion, and was elected to the HOF All-Decade Team of the 2000s.

The four sacks by T.J. Watt against the Browns on Monday night were the most by a Steelers player since Joey Porter had four in 2001 against the Buccaneers. #Steelers pic.twitter.com/9Ck7wvpOxX

In comparison to Harrison who both Alex and I believed should be inducted into Canton, Porter tops him in sacks (84.5), fumble recoveries (9), pass deflections (24), INTs (8), and defensive scores (1) per regular season stats. Harrison does have a Defensive Player of the Year nod on his resume over Porter, as well as an extra Pro Bowl and All-Pro nomination over him, and possibly the most memorable moment in Super Bowl history.

Still, being ahead of Harrison in career sacks must mean something as Harrison currently holds the record for career sacks in a Steelers uniform. When comparing Porter to other Hall of Famers, Porter is just 2.5 sacks behind HOF Charles Haley (100.5) and has more sacks than HOF DEs Bryant Young and Howie Long.

Obviously, sacks aren’t everything when it comes to a Hall of Fame resume, but when you look back at those early 2000s Steeler teams that were making deep playoff runs and hoisted the Lombardi Trophy after the 2005 season, Porter is likely the name many will turn to as the leader of that gritty defense. He led both with his vocal presence in the locker room as well as by example on the football field, being the guy alongside Jerome Bettis the team turned to.

Jerome Bettis & Joey Porter’s locker room speech will have you ready to run through a wall.

There was no stopping the #Steelers on the way to Super Bowl XL. pic.twitter.com/CFrUVjBTPB

We often forget about Porter’s impact after he left Pittsburgh when he playing in Miami and Jacksonville as well. In 2008, Porter won the AP Comeback Player of the Year Award with the Dolphins when he posted a fantastic season with 17.5, 18 TFLs, and four forced fumbles. He ended his career with six seasons of 9+ sacks and should be credited for helping pass the torch to guys like Harrison and Troy Polamalu who laid the foundation for Pittsburgh’s dominant defense during the 2008 season that took them to another Super Bowl.

Who remembers this play? Scrolling through some old Dolphins content on YouTube. Those Fins defenses were tough. Fun fact : Joey Porter was the NFL’s sack leader with his 17th after this one. #FinsUp pic.twitter.com/B6N6f27hhU

I’m not saying that Joey Porter should be considered a bonafide first-ballot Hall of Famer, because he obviously wasn’t. However, since many of yinz believe that James Harrison should deserve consideration to be inducted into Canton, I would argue that Porter has a well-built argument of his own based on his career accomplishments and what he meant to the Pittsburgh Steelers in their pursuit for championships.

What are your thoughts on Joey Porter? Do you think that he should deserve Hall of Fame consideration? How would you compare his career to that of James Harrison? Please leave your thoughts in the comments section below and thanks again for reading!