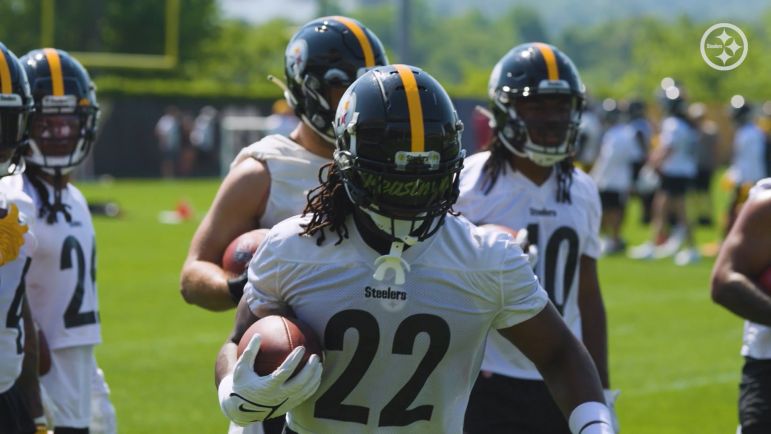 The Pittsburgh Steelers may not have signed any veteran free agents or drafted anybody at the position, but they still hope to have a competition this summer at the running back position. Returning Najee Harris, Benny Snell, and Anthony McFarland from last season’s roster, they added two rookie college free agents in Mataeo Durant and Jaylen Warren.

Although the two of them are essentially competing against one another for what may not even be a roster spot at all, it hasn’t been difficult for them to work together in the best interests of everybody. Indeed, they’ve become more than teammates; they’re now friends. Even if they’re competitors.

“The competition factor is there, but you don’t want to lose your integrity when you are competing with someone”, Durant told Chris Adamski for the Pittsburgh Tribune-Review earlier this offseason during the Steelers’ spring workouts.

Saying of Warren that “Jaylen’s my guy”, Durant noted the lengths to which they support each other, understanding that they are in similar situations. “We look out for each other. If we have questions about plays, we are there for each other, making sure we are both on point”, he said.

The Steelers did keep four halfbacks on the 53-man roster in 2021, with Kalen Ballage being the absent party, so it’s not necessarily the case that one of Snell or McFarland would have to be unseated in order for one of the rookies to earn a roster spot—though Connor Heyward complicates the equation.

The Steelers haven’t had a lot of success with undrafted running backs lately. The last one that they were the initial team to sign who actually went on to do anything was Isaac Redman, and we’re talking about a decade ago at that point.

Part of the issue is the fact that they have drafted a lot of running backs—almost every year, they add to their collection. Before the latest trio named above, there was Jaylen Samuels, then James Conner, Dri Archer, Le’Veon Bell, Chris Rainey, Baron Batch, Jonathan Dwyer, Frank Summers, and Rashard Mendenhall.

The 2022 offseason has been one of the rare years during which they haven’t made a prominent addition to the running back room, giving rookie free agents like Durant and Warren the best chance that any such group has probably had to make the roster in some years.

And each wants to see the other succeed. It’s very unlikely that both could feasibly end up on the 53-man roster, but the good news is that there’s always the practice squad. But here’s hoping that at least one of them can show the coaching staff enough to earn his place on the team.