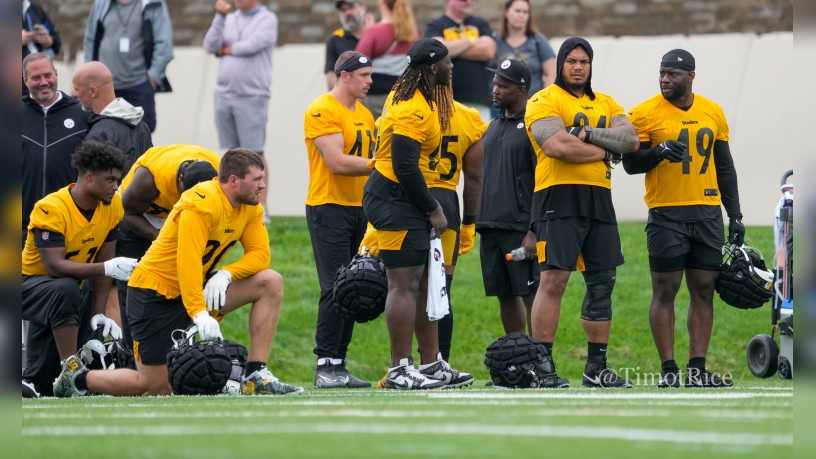 When the Pittsburgh Steelers made the surprise hire of former Miami Dolphins head coach Brian Flores as the new senior defensive assistant and linebackers coach, the black and gold knew they were getting an intense, straightforward, no nonsense coach who demanded excellence out of his players.

That was on full display throughout OTAs and minicamp, but it’s been raised a level in training camp through four practices. Entering a pivotal season in the careers of Devin Bush and Myles Jack, the Steelers are hoping to see a major bounce back from the inside linebacker position in 2022 after a dismal 2021 season from Bush and Robert Spillane overall.

With Flores in the fold, the Steelers are banking on him getting the best out of a young linebacker group overall, in turn making the Steelers a better defense and a better team overall.

So far, that seems to be working as the Steelers’ linebacker group has looked good through four practices at Saint Vincent College in Latrobe, while also going through a major rotation overall across the three teams. Speaking to reporters after practice Friday in Latrobe, Steelers linebacker Robert Spillane again spoke highly of Flores, stating that he appreciates how concise and clear the veteran coach is, and how he doesn’t mince words as far as his expectations go.

“In terms of Flo [Flores], you know, he is a coach with head coaching experience. He could be a head coach in this league. So to have that in our room, working with him every day is really special,” Spillane said to reporters, according to video via Steelers.com. “I’m glad to be able to do that. …I mean, just in terms of clearing things up for guys, he’s very concise and he doesn’t mince his words. He knows what he wants and he expects us to get it done. So I love working with him.”

Having a coach who not only communicates clearly and directly, but is also up front and honest about his expectations overall is a huge boost for any team in professional sports, let alone the Steelers. That’s not saying that the Steelers didn’t have that in the past with a guy like now-retired defensive coordinator Keith Butler, but the addition of Flores to the coaching staff gives the Steelers a new, fresh set of eyes with a different style of coaching, which seems to have woken everyone up in the linebacker room, pushing them to a new level.

That’s exactly what the Steelers were aiming for when head coach Mike Tomlin and owner Art Rooney II brought Flores into the mix, keeping him with the NFL circle after he filed a lawsuit against the NFL alleging racial discrimination in had coaching searches. Despite all the noise going on around him legally, Flores has been up to the task as the Steelers’ senior defensive assistant and linebackers coach, working closely with guys like Bush, Jack and Spillane in an effort to get the most out of them.

“He is very clear. He’s open minded. He’s willing to work with players,” Spillane added, according to video via Steelers.com. “He wants to see what we’re seeing on the field, what we’re saying on the field. So I love working with him.”