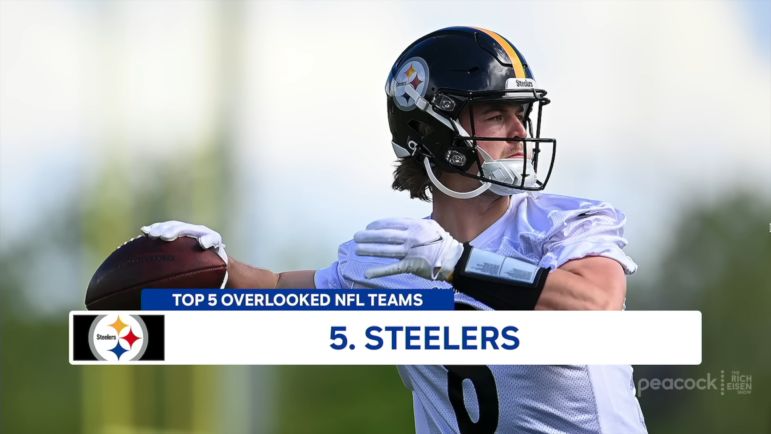 We talked on Friday about comments from Kyle Brandt, who picked the Steelers as the team who isn’t getting enough hype this year. The day before that, it was Rich Eisen, including Pittsburgh on his list of the top five teams that teams are sleeping on—in part because of who else is in their division:

We are too focused on everybody else in the AFC North, and meanwhile, the Pittsburgh Steelers are sitting down at the bottom of this list at number five. Kenny Pickett, is he gonna start? It looks like it could be Mitchell Trubisky.

But I’m talking about year two of Najee Harris. What is this kid gonna look like in year two, with his feet completely wet, ready to go. Minkah Fitzpatrick is now playing with heavy pockets just like T.J. Watt did last year. You got your guy Cam Heyward sitting right there on that defensive line as well.
Everybody’s sleeping on ‘em. Nobody’s talking about the Pittsburgh Steelers, because we’re talking about, more importantly, two other teams in the AFC North, with the Ravens and what’s going on with Lamar Jackson, and then, clearly, everything going on with the Cleveland Browns.

Considering the fact that the Steelers do have one of the more significant training camp battles for a starting quarterback position that we have seen in years, there is perhaps a valid argument that Pittsburgh should be discussed more.

But the very fact, of course, that they have an unsettled quarterback position is justifiable reason to give people pause when assessing the likely outcomes for the Steelers this year. If they don’t know who their quarterback is, then, well, they say that if you think you have two quarterbacks, you really have none.

Now, when one of your quarterbacks is a rookie, you do have to give him some leeway, as not everybody is going to benefit from starting right away, so if Pickett has to wait a bit to start while Trubisky holds down the fort, that’s really not the end of the world.

But as Eisen says, this is a team that’s going to be about a lot more than just who’s under center. Whether it actually comes to fruition or not, they have the intention of improving and expanding the running game, and with upgrades to the offensive line and Harris having a season under his belt, there should be at least some improvements.

A healthier and more stable defensive front seven should also go a long way toward stabilizing the entire unit. They won’t have starters that they picked up in training camp. They won’t have people coming off of injuries that directly affect their performance or who were otherwise absent.

They went 8-6 with Mason Rudolph and Devlin Hodges at quarterback in 2019. Who really thinks they can’t go 10-7 or 11-6 with Trubisky or Pickett, with Harris, Watt, Fitzpatrick, Heyward, Diontae Johnson, and Chase Claypool in tow? It’s not like that 2019 team had Antonio Brown, and JuJu Smith-Schuster was in and out with injuries. James Washington led the team in receiving yards that year. Woof.