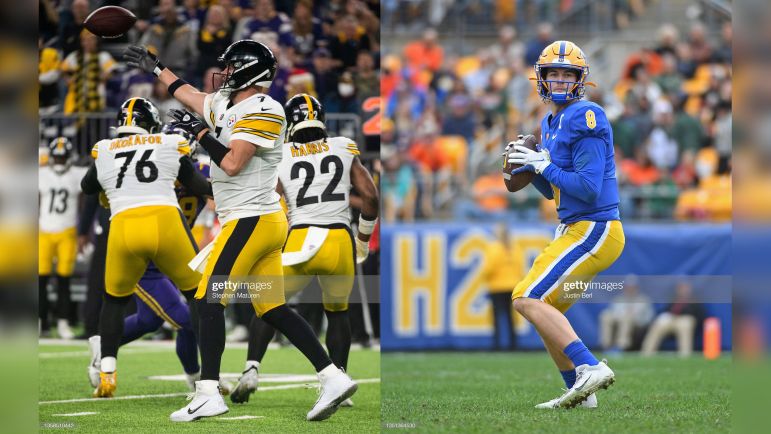 While there were a number of teams in the 2022 NFL Draft looking for quarterback help, not many came away satisfied with their options. In fact, only the Pittsburgh Steelers, it seems, were duly impressed with the selection at their feet, as they were the first to take a quarterback, 20th overall, with no others drafted in the first two rounds.

That would be Kenny Pickett, who didn’t have to move far. But he does come into a team looking to replace a future Hall of Famer. And former first-round pick Robert Griffin III believes that’s a mindset that the rookie has to avoid.

“For Kenny, the main thing is, you’re not Ben Roethlisberger. You don’t have to be Big Ben”, he said on SiriusXM Blitz on NFL Radio with Bruce Murray recently. And he doesn’t have to have the same sort of rookie year as Roethlisberger—which is the type of year he was never supposed to have.

“Big Ben did not start as a rookie, right? He sat behind Tommy Maddox and Charlie Batch”, Griffin recalls. “It just so happened that those guys got injured and Big Ben went in and did his thing and the rest was history. I think the Steelers might be trying to set up Kenny Pickett the exact same way”.

The Steelers brought in veteran Mitch Trubisky in free agency, and he has been running as the starting quarterback since OTAs, with the expectation that that will continue in training camp. While Pickett will be given the opportunity to win the starting job, they are not pressuring him to perform right away.

Even if he has certain advantages that other rookie quarterbacks do not have, including his destination. “He’s in a place where he’s very familiar. He just changed the door that he was walking into there in Pittsburgh”, he said of the Pittsburgh Panthers alum. And Griffin also spent time with Pickett before the draft to get a sense of his workout regimen.

“When I went down and worked with him before the draft, I just came away amazed, not at how hard this guy works”, he said, “it was just how long he’s been doing it. I wasn’t working out the way that Kenny Pickett has been working out for the last six years, because I didn’t have that specialized training”.

“This guy can make every single throw”, he added. “His processing ability as a quarterback is, I believe, the highest of all the guys that were in his draft class”.

Still, he is not being looked to as some unmissable generational talent, nor the immediate savior of the franchise. He was brought in to develop into their starter, but the pressure isn’t on him to be the face of the organization right away.

In that regard, it probably helps to have a running back like Najee Harris and a defense that can hold its own. Having one of the most reliable kickers in NFL history probably won’t hurt, either, as at least you can be pretty confident of getting three points when you’re in range.