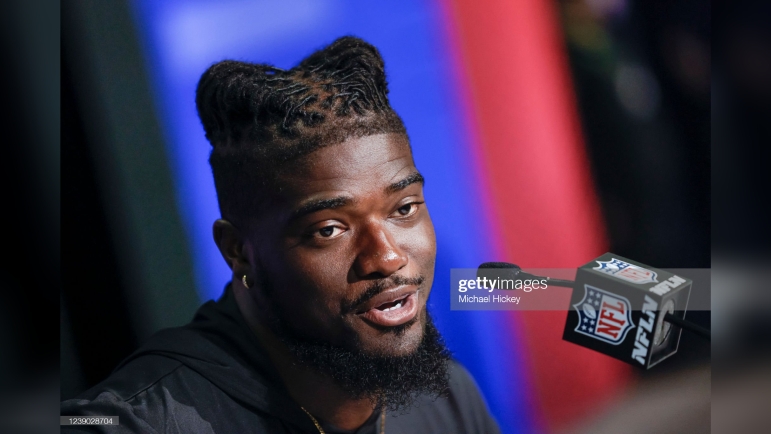 Former Michigan pass rusher David Ojabo is the only 2022 rookie draft pick who has yet to sign his contract entering training camp out of the more than 260 players who were drafted in April. He is also the only one of them who no-showed to training camp.

Viewed as a consensus first-round talent, Ojabo suffered a torn Achilles while working out at Michigan’s Pro Day. That the Baltimore Ravens drafted him with the 45th-overall pick as a second-round selection is a testament to their belief in his talents.

There are no reports as to why Ojabo has not yet signed his contract, but it is worth noting that every single first-round draft pick received a fully-guaranteed contract this year, and there are even three selections in the second round who received more than three years of their rookie contract fully guaranteed—that is, it contains some partial guarantees in year four.

Given that he surely views himself as a first-round talent, one might be inclined to speculate that Ojabo believes that he deserves more of his contract fully guaranteed than others who were drafted near him. Or, alternatively, it could be the Ravens who are trying to protect themselves against potential complications from Ojabo’s injury, protection that the rookie is understandably reluctant to grant.

One thing must be said, and that is that there is nothing wrong with him not showing up to training camp. Because he does not yet have a signed contract, to put it under the most obvious terms possible, that means he is not under contract, and thus he is not currently an employee of the team, even if they own the rights to his services.

Since he doesn’t have a contract, he has no obligation to show up to training camp, and he can’t be fined or disciplined in any way. More importantly, without a contract, he loses important protections that he would be exposing if he were to get on the field and get injured. Until that contract is signed, he shouldn’t be anywhere near the grass.

Oh, and there’s the minor point that he can’t actually practice anyway. He’s injured. He would be doing rehab. And I’m willing to bet whether or not one has a contract affects team-based rehab as well.

Under normal circumstances, the fact that the 45th-overall selection is the last draft pick to sign would be a real head-scratcher, and seemingly completely random. But that 45th-overall pick just so happens to be a first-round talent whose draft stock only fell because of an injury that he sustained while working out for teams in the pre-draft process.

It’s for that same reason that many are inclined to assume that the reason his contract is not yet signed is that he expects that contract to look more like the ones players got in the first round, at least in terms of structure and guarantee percentages. Obviously, the actual numbers are slotted within a system.

But let’s also keep in mind that this is all speculation. We don’t know what the hold-up with the contract is, and we probably won’t know until he signs it and reports leak about what it contains.

With training camps now open across the league, former Michigan linebacker and Ravens’ second-round pick David Ojabo remains the lone unsigned drafted rookie. It shouldn’t be hard to get done, but the two sides have been unable to agree on Ojabo’s third-year guarantee percentage.