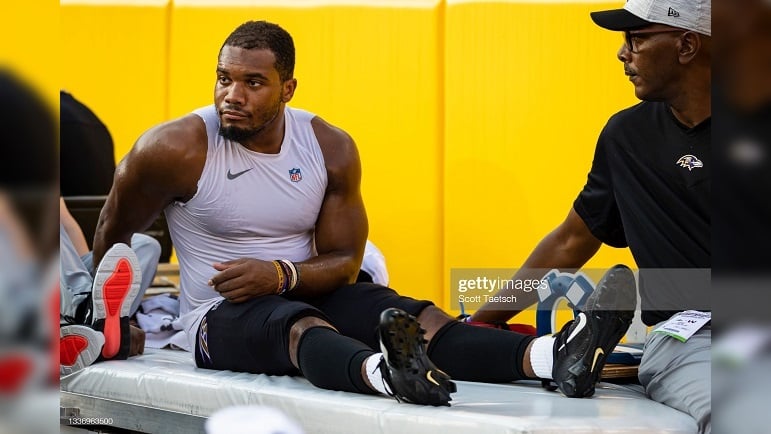 The Baltimore Ravens are among the handful of teams who have already opened up training camp, with the Pittsburgh Steelers set to hit Latrobe next week. Yesterday, they placed six players to begin training camp on the Active/Physically Unable to Perform List, a series of names that are mostly high-profile, but really no surprises.

Perhaps the most notable name on the list is only notable because of what he said last week, and that would be third-year running back J.K. Dobbins, who missed all of the 2021 season after tearing his ACL in the final preseason game. After Ian Rapoport reported that his status for the season opener could be in doubt, he responded, going so far as to say that he might not even begin training camp on the PUP List.

Well…he got that wrong. He could still very easily be ready to go for the start of the regular season, but the coaching staff obviously doesn’t want him practicing just yet, no matter how fantastically he thinks his rehab has been going. And it’s not uncommon for players to have overly ambitious return-from-injury expectations.

Of course, Dobbins isn’t the only name on the list, nor the only notable name. All-Pro left tackle Ronnie Stanley and All-Pro cornerback Marcus Peters, both of whom missed all or nearly all of the 2021 season, join Dobbins, as does fellow running back Gus Edwards, who was also out for all of last year. Rounding out the group is outside linebacker Tyus Bowser and safety Ar’Darius Washington, the latter being the only one along with Edwards who is not a starter.

The Ravens and head coach John Harbaugh have been consistently conservative and guarded whenever asked to comment upon the status of their injured players and what their timeline for return might be. He hasn’t guaranteed that any of his notable injured players would be ready in time for the start of the regular season.

All of them, however, appear to be well on their way back to a full and healthy return, if not in time for the start of the regular season, then sometime shortly thereafter. And Dobbins, Peters, and Stanley all would certainly be very welcome returns for a team that significantly missed all three of these key starters last year.

Alejandro Villanueva, now retired, moved from right tackle to left tackle after Stanley was injured. The backfield consisted mostly of past-their-prime former Pro Bowlers like Le’Veon Bell and Devonta Freeman and Latavius Murray. And as for the secondary, they had to start Anthony Averett and third-round rookie Brandon Stephens.