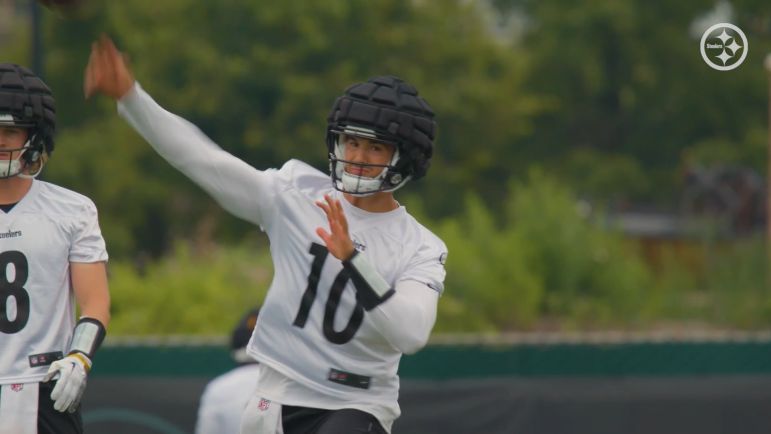 As we move closer and closer to the start of Pittsburgh Steelers’ training camp at St. Vincent College in Latrobe later this month, I move further along in my offseason series Ranking The Steelers’ Starters here for Steelers Depot.

After a busy offseason that featured quite a bit of change for the black and gold, I’ve found it harder and harder to ranking the Steelers’ starters early on in this series, meaning it’s going to be very, very tough later in the series.

Before we dive into the first three starters ranked near the bottom in my rankings, I wanted to lay out my projected starters for the season as we draw nearer to Steelers’ Training Camp. Below, I went with 11 personnel and a three-receiver set offensively, while going with the Steelers’ sub-package defense.

If a name is in italics, it means they’ve appeared on the list to day. You’ll see six names below already in italics.

Now, it’s time to dive into the next installment of my Ranking the Steelers’ Starters series here at Steelers Depot.

After an injury-plagued season that saw him play in just nine games, Dotson falls a spot in my rankings for the Steelers.

Still, I remain rather high on Dotson’s outlook as the left guard of the future in the Steel City. When healthy, Dotson is a really good building block for the Steelers on the interior of the offensive line. He’s a powerful run blocker and is a shutdown pass protector. Though injuries really sapped his mobility and effectiveness in 2021, I still believe Dotson can become the stalwart left guard the Steelers envisioned him being after a strong rookie season in 2020.

With a rebuilt interior of the offensive line, a lot rides on Dotson’s progression in Year 3.

I believe Trubisky will be solid in Pittsburgh in 2021, leading an offense that fits his skillset well under second-year coordinator Matt Canada. Still, he’s played more than 50 games in the NFL and has struggled — for the most part — throughout his career.

Yes, he led the Chicago Bears to the playoffs twice in his tenure in the Windy City, but a tiger doesn’t magically change his stripes, especially this late in his career. Could he have a career resurgence in the Steel City? Absolutely.

He’s a mobile quarterback with a good arm and solid accuracy when throwing on the run. He makes some critical mistakes with the football though, which has hurt him throughout his career. Plus, he’s going to be looking over his shoulder at some point with Kenny Pickett knocking down the door. He’s a fine starting quarterback, but he’s not moving the needle that much for the black and gold in 2022.

As a full-time starter in 2021, Sutton showed flashes for the Steelers in the secondary, shifting back and forth between boundary and slot corner under Keith Butler. Still, he struggled at times, especially on the boundary. He’s much more suited for the slot in nickel and dime situations.

I love his leadership in the secondary and his overall versatility, but I ended up dropped him three spots in my rankings for this season due to some of those struggles last year. That said, he recorded a career high in tackles and interceptions in 2021 while starting all 16 games. His overall versatility is something that endears him to the Steelers’ coaching staff. He’ll need to take a step forward in the tackling department in 2022 after missing more than 20% of his tackle attempts as a first-year starter.

He’s the leader of the secondary alongside Minkah Fitzpatrick though, and that counts for something on a great Steelers’ defense.