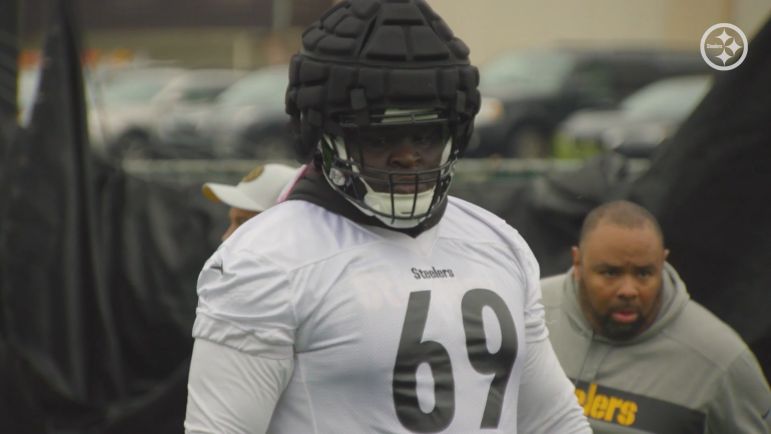 It took some relative pain and suffering from a couple of teams in the AFC North in recent seasons to realize just how important interior offensive line play is in today’s game, even in a pass-first NFL.

After some struggles, teams are starting to invest heavily in the offensive line once again — especially on the interior. That’s led to an uptick in overall talent at the center and guard positions in the AFC North, which will certainly shake up my iOL rankings for Steelers Depot this season.

Last season, it wasn’t really close with the Cleveland Browns well out in front of the rest of the AFC North at center and guard. After an offseason filled with changes for all four teams, that won’t be the case ahead of the 2022 season.

Previously, I would just focus on offensive lines as a whole, but for the second year in a row I have decided to break my Ranking the Rooms: AFC North pieces on the offensive line up into offensive tackles and interior offensive linemen.

I had the Browns well out in front of everyone else in the division this time last summer. This year, it was a real debate for me between the Browns, Bengals and Ravens, who all made significant changes within the interior of the offensive line.

I am sticking with the Browns as the top team in the AFC North though, at least for another season, due to the terrific guard tandem Cleveland has at its disposal. Though veteran center J.C. Tretter is gone as a cap casualty this offseason, standout guards Joel Bitonio and Wyatt Teller remain. That alone should be able to help the Browns continue their high level of play in the trenches.

Bitonio remains one of the more underrated guards in the entire NFL, while Teller has been on quite a run of dominance since joining the Browns and their power rushing attack.

Behind Bitonio and Teller, the Browns have relatively solid depth with the likes of Michael Dunn and Drew Forbes, who have performed well in spot starts. Hjalte Froholt is an intriguing option in the Browns power rushing attack after joining Cleveland following a stint with New England, while David Moore, Blake Hance and rookie Dawson Deaton will battle it out to be the swing guard/center combination in Cleveland.

The only real concern here on the interior for the Brows is at center after cutting Tretter. Cleveland previously invested in center Nick Harris in the 2020 NFL Draft as a zone scheme center, but his short arms and smaller stature raises some concerns. Ethan Pocic was signed in free agency as a veteran option, while the Browns added undrafted free agent Brock Hoffman at the position, fitting the mold of a nasty, physical run blocker on the interior.

Cleveland’s offensive line will significantly miss Tretter’s leadership at center though, at least in 2022.

One season after finishing last in these rankings, the Bengals jump to No. 2 on the list, in large part due to their activity in free agency after a surprising Super Bowl run.

Cincinnati added veteran center Ted Karras in front of Joe Burrow, and inked guard Alex Cappa away from the Tampa Bay Buccaneers, giving Burrow serious protection in the interior. Karras might not move the needle a ton at center, but he’s a solid veteran overall that won’t miss assignments and is good at communicating protection calls.

At left guard, the Bengals will look for D’Ante Smith, Jackson Carman and Hakeem Adeniji to battle it out for the starting job. Adeniji started at right guard in the Super Bowl, but with Cappa in the fold the Bengals will probably ask him to flip sides. Carman and Smith were significant draft capital investments, so having one of those win the job would be ideal for Cincinnati’s future.

Behind Karras at center, Trey Hill, Lamont Gaillard and Ben Brown will battle for the backup job. Hill has the inside track overall, while Gaillard is an intriguing, powerful people mover at the position, though he’s on his second team in three seasons in the NFL.

For a long, long time, the Ravens were right there with the Steelers as the cream of the crop on the interior of the offensive line. That’s not the case anymore as the two longtime AFC North powers sit at the bottom of my rankings here.

The Ravens are reinvesting heavily though, starting with the decision to draft Iowa standout center Tyler Linderbaum in the first round of the 2022 NFL Draft. Widely considered the top interior lineman in the class, Linderbaum slid a bit in the first round due to his size and overall lack of fit in most offenses. He’s a great leverage player though, one who thrived at Iowa in the Big Ten.

Linderbaum should start right away for the Ravens between the likes of Kevin Zeitler and Patrick Mekari. Both are veteran presences that played well for stretches throughout the 2021 season, though Mekari is likely to slide back inside from right tackle to left guard, where he’s much more comfortable.

Behind the projected starting trio, the Ravens have decent depth overall. Center includes Trystan Colon and Jimmy Murray behind Linderbaum, while guard sees the Ravens roll out Ben Powers (844 snaps in 2021), Ben Cleveland, Tyre Phillips and Kahlil McKenzie. Powers would probably be a starter on half the teams in the league, but in Baltimore he’s a solid swing interior lineman overall, one that fits perfectly in Baltimore’s run-heavy approach.

The Steelers did a really nice job addressing the interior offensive line heavily in free agency with the signings of Mason Cole and James Daniels. Still, the group lags behind the rest of the division overall.

One year after being forced to cut star David Decastro due to injury and rolling with Trai Turner at right guard, the Steelers are in better shape overall at the position with Daniels, who is still just 24 years old and is a solid starter overall. With Cole, the Steelers are banking on placing him at center full time, allowing him to find his game.

He’s just 26 years old but is a veteran with 39 starts at guard and center with the Cardinals and Vikings, so experience is not an issue whatsoever. Both are much better run blockers than pass protectors, which fits what the Steelers will try and do offensively with Najee Harris in the backfield.

At left guard, Kevin Dotson is healthy again and looks to hold off 2021 third-round pick Kendrick Green in a training camp battle after Green switched back to his natural position this offseason following a disastrous 2021 season at center. Dotson is the better player, but Green brings more athleticism and could thrive in the Steelers’ scheme where he’s on the move more.

Behind Cole and Daniels, the Steelers have some question marks. J.C. Hassenauer was rather solid at times in 2021 at center, so there’s some comfort there if he has to play extended snaps on the interior. After that though, it gets a bit dicey.

The Steelers liked what John Leglue did down the stretch last season filling in for Dotson, but asking him to replicate that play again in 2022 is a stretch, considering how often he bounced around the league before setting in Pittsburgh.

Nate Gilliam is in the mix, as is undrafted free agent Chris Owens out of Alabama, whom the Steelers want to see at center, though he has experience playing all across the offensive line under Nick Saban.

It’s not great overall, but it’s better than what the Steelers rolled out in 2021 on the interior, though that isn’t saying much.