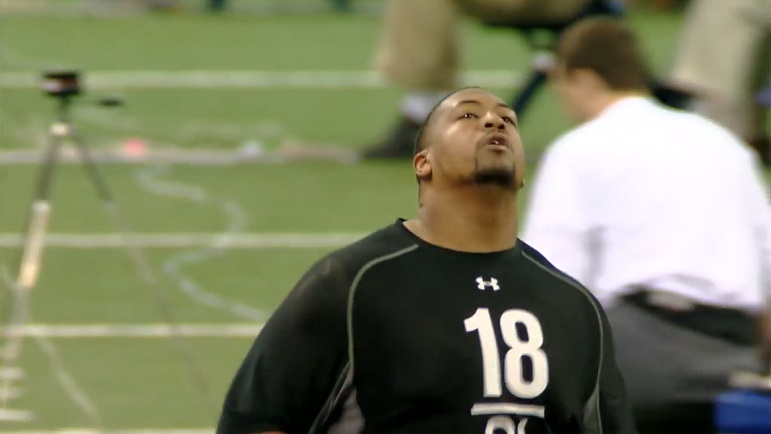 Do you remember the 2009 offseason? That was the year that the Pittsburgh Steelers signed offensive lineman Ramon Foster as an undrafted free agent out of Tennessee. Foster went on to beat the odds, however, as he not only made the Steelers 53-man roster out of training camp, but he also went on to play 11 NFL seasons and all of them in Pittsburgh. Appearing on the Raw Room Podcast on Friday, Foster discussed his process from signing as an undrafted free agent to finally making the 53-man roster out of training camp.

First, Foster revealed the pre-draft process he went through in 2009 and how he almost signed with the Cleveland Browns as an undrafted free agent.

“The craziest thing ever after the draft, I probably had like 13 calls coming in,” Foster said. “Like, priority free agent. I don’t understand none of this, but later in the seventh [round], I’m talking I had calls, ‘Hey, we gonna take you as a free agent.’ I had like 13 calls, like offers on the table. The ones I was real serious about, the Jets, Pittsburgh, Baltimore, Cincinnati – AFC North teams – and I think Kansas City was out there. Those were the teams I was really looking into. My decision came down to, I didn’t want to go to New York because of taxes. I already knew that. Cleveland was on me the hardest. Had it not been for my agent at the time, I’d have probably gone except there was this one little blip. Cleveland, undrafted, offered me $2,500 to sign, but they recruited me the hardest, so I was attracted to that though. And like the scout was all over me.

“And Pittsburgh came with eight grand as a priority. That was huge back then. I was like, ‘Hey, let’s go.’ But the Jets offered me 16 [thousand]. They actually offered the highest amount, but I knew taxes at the time. That was gonna be cut in half, that’s really 8 [thousand]. My agent told me Pittsburgh’s a land of opportunity. I was so dug in. As far as the draft goes, I didn’t realize, and I told them that, they had won the Super Bowl. The year before I got to them, in 2008 they won a Super Bowl. I was just so locked in that it didn’t register then. But he just told me Pittsburgh’s a land of opportunity. I was probably like that close to going to Cleveland because the want was there.”

After telling how he almost landed with the Browns as an undrafted free agent, Foster went on to explain that once he signed in Pittsburgh that they told him they had a midround draft grade on him.

“What’s crazy about it, soon as I get to Pittsburgh, they were like, ‘You know we had you as a third rounder?'” Foster said. “I walk into the weight room, you know how they introduce everybody to the building; the strength coach is in there, assistant strength coach, assistant line coach. Another guy walks up, ‘Man, we had you as a third or fourth rounder. I don’t know how we got you.’ I’m like, ‘I don’t know how the hell you got me either’. But that was immediately like walking into the weight room, getting introduced to how they do stuff, I got told that like four times by different people. And what’s wild is when I retired, Pittsburgh actually sent me my draft slip and on my draft lip from them it said three to five.”

The Steelers, by the way, selected three players in the third round of the 2009 NFL Draft and they were Kraig Urbik, Mike Wallace, and Keenan Lewis.

So, what prevented the Steelers from drafting Foster in the middle rounds?

“They actually told me why they didn’t and showed me where they actually had me at,” Foster said. “I was slated as a tackle, but I ran a damn 5.5, 5.6-second [40-yard-dash]. So, I’m not tackle NFL speed because everybody has a pecking order on how to do stuff. And there was a thought I could play guard, but most people, it’s like telling the d-lineman to go play outside. You feel me? Like changing positions. Like they didn’t know if that was gonna be possible. But my 40 was too slow.”

Foster went on to explain his slow 40-yard dash time that he ran at the 2009 NFL Scouting Combine in Indianapolis.

“Crazy thing about my 40, I caught a nosebleed right before I was supposed to run,” Foster said. “In Indy. I heated up. I don’t know where it came from, and I was running live on TV too. It’s out there. If you see me running, my head is like tilted back and you see me sniffing because I’m like trying to stop blood from coming out. You see me holding my head up as long as I can. So, I was botched from the beginning.”

Later in the interview, Foster explained that 2009 training camp battle he went through that ultimately led to him winning a roster spot.

“My motto from the day I learned it, where football became a business, if it was game between me and you, I’m gonna step on your neck to get what I want,” Foster said. “I’m gonna dap you up after the fact, but I got met with that early on in camp. There was two 73s on [the] roster. They drafted a guy, and I was the undrafted 73. And what’s crazy, the guy that wore 73 before us, was gone. So, it’s really like, somebody gonna get this.”

In case you forgot, the Steelers selected defensive end Ra’Shon Harris out of Oregon in the sixth round of the 2009 NFL Draft and he was issued No. 73 as well that summer. Additionally, the Steelers player who had previously worn No. 73 had been guard Kendall Simmons, who was released by the team in February of 2009 after seven seasons in Pittsburgh.

“And we lined up, dog, and the D-line coach, who’s the assistant to the head coach, John Mitchell, a historical black player, the man played at Alabama,” Foster said. “One of the first black players under Bear Bryant and everything. So, when he speaks, the whole room shut up and listened. So, we’re lining up, and y’all don’t know how camp is, one on ones every day. But then it was getting close to the first cut. And we had just played in that first preseason game, and he hit us with, ‘I don’t know if y’all see what’s going on, but there’s two 73s, one on D and one on O. Only one of y’all gonna make it.’ Mind you, we was homies, roommates. If we went to snack, I’m walking with him or with the group. And I’m like, ‘damn, what’.

“Mind you, though, my situation, well his situation was the same. I just had a kid, the kid had open heart surgery. I didn’t get drafted. I got all that going on. I told my girl, now my wife now, I was like, ‘I’ll see you on the bye week.’ Dumb as hell. Not really realizing what I’m saying, because I didn’t really understand it, but when he presented me with that though, like, only one of y’all can make it, he’s gotta go.”

After telling about his training camp battle for a roster spot, Foster was then asked to reveal when he thought he knew that he had a chance at making the team.

“When the old heads started coming up to me more,” Foster said. “In preseason going into game three and stuff like that. And I went in early.”

Foster also described an encounter he had had with head coach Mike Tomlin that made him feel good about his chances of making the roster after initially not having a good start at training camp.

“It was that and coach Tomlin is one of the most transparent coaches you’ll meet,” Foster said. “He called me out like the first day. I got worked in the first day of pads, I got worked by the old heads. He put me up on the big board, I thought I was done. But after I caught up to their point, it was like, okay, if I just fight, just dog them. If I just grind. And that’s the recipe. If I just fight, grind, go, I’m gonna be straight. And that’s all they told me in the beginning. ‘Just fight. Just go.’

“And we were walking to snack and coach Tomlin came out, he was working out, ‘Hey, Foster, Big Mone, come here.’ ‘What’s up coach?’ And he was just, ‘How you feel?’ ‘I feel all right.’ ‘How you feel you’re doing?’ ‘Feel pretty good about it.’ ‘Okay, good, just keep doing that.’ Like this was mano a mano from the guy. And I’m like, alright, okay.”

Foster obviously was the winner of No. 73 in 2009 and he went on to wear that number his entire career with the Steelers. As for Harris, the other player who wore No. 73 during the Steelers 2009 training camp, he failed to survive the final round of roster cuts and ultimately landed on the team’s practice squad with a different number.