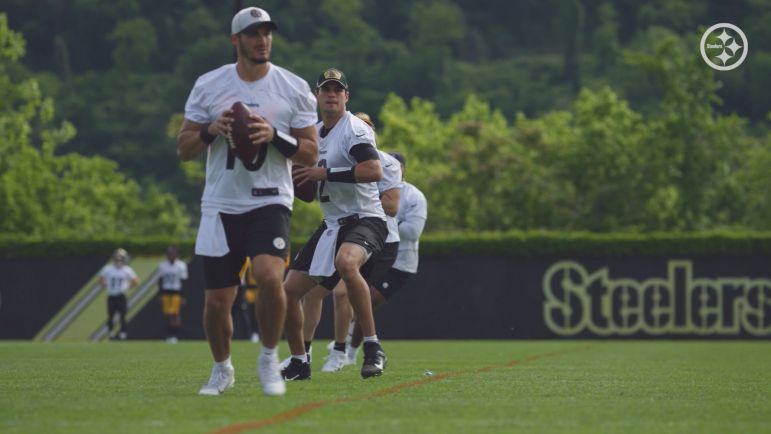 In three weeks the Pittsburgh Steelers will start to show what they’re made of for the 2022 season at training camp in Latrobe.

Currently, the roster looks rather strong overall — at least on paper – though some concerns remain with cornerback depth, the play of the inside linebackers, and the overall offensive line. Still, the success — or failure — of the Steelers in 2022 will come down to the quarterback play in second-year offensive coordinator Matt Canada’s system, according to The Athletic’s Mark Kaboly.

In a piece that published Thursday highlighting one summer concern for all 32 teams, Kaboly tabbed the Steelers’ play under center as the team’s biggest concern right now, stating that the Steelers need to get good play out of Mitch Trubisky, Mason Rudolph or Kenny Pickett under center if the black and gold aims to compete in 2022.

“The Steelers have more than one concern. Depth at defensive line, talent at cornerback, the health of their inside linebackers, doing enough to upgrade the offensive line and whether offensive coordinator Matt Canada’s college-style motion offense is translatable to the NFL are high on the list,” Kaboly writes for The Athletic. “But nothing is higher than how the quarterback position will play out between free-agent pickup Mitch Trubisky and first-round pick Kenny Pickett. Trubisky is the front-runner to start Week 1 after taking first reps during the spring, but it’s being framed as a competition. The Steelers need good play out of their quarterback to have any chance of competing, and that’s no guarantee at this point.”

While the Steelers certainly need strong quarterback play overall under center from one of Trubisky, Rudolph or Pickett, depending on who wins the job for the Sept. 11 opener on the road against the Cincinnati Bengals, it’s a bit of a stretch from Kaboly to say that the position is the Steelers’ biggest concern at the moment, especially after the position was relatively praised all offseason after the work the Steelers put in signing Trubisky in free agency and Pickett — the top quarterback on the Steelers’ board — in the 2022 NFL Draft.

For now, the lack of depth behind the top three cornerbacks in Ahkello Witherspoon, Cameron Sutton and Levi Wallace is a bit suspect, as is the depth at outside linebacker behind T.J. Watt and Alex Highsmith, not to mention the lack of depth at running back behind Najee Harris.

That’s very unlikely. Is the expectation being a good game manager, not hurting the team and not losing games by taking care of the football, making the right reads and throws? That’s much more the likely scenario, and in today’s game that doesn’t take much to do, especially in a quick-strike passing attack that aims to get the football out quickly.

The real concern is the Steelers’ offensive line and how a rebuilt interior will performance in the ground game and holding up in pass protection, not to mention the continued developments of Dan Moore Jr., Kevin Dotson and Chukwuma Okorafor. That’s something to watch much more closely, from a the Steelers’ competitive standpoint, rather than the perceived good or bad play under center.