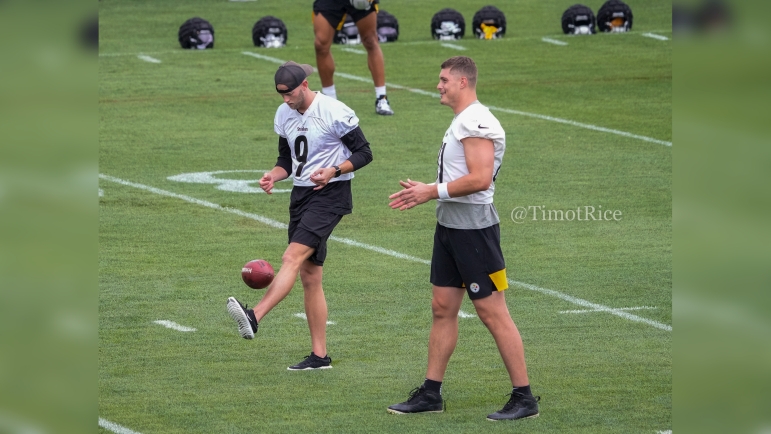 Are you ready for the Pittsburgh Steelers to sign veteran kicker Chris Boswell to a contract extension? While it has yet to happen since the team reported to Saint Vincent College in Latrobe on Tuesday, it is sounding like it’s only a matter of time before the former undrafted free agent out of Rice signs on the dotted line.

During a Thursday media session ahead of the Steelers Thursday training camp practice, Boswell was asked if he’s optimistic that a contract extension will get done before the season starts.

“I am sure, I am sure,” Boswell said, according to Chris Adamski of the Pittsburgh Tribune-Review. “But I am here to kick, and I am here to do what I can for the team; I am not here to think about a contract or numbers.

“I am going to go out there (and work); I made it that way this far in my career, so I am not going to start worrying about that (contract situation) now.”

As has been mentioned several times on this site throughout the offseason, Boswell not getting a new deal inked prior to Week 1 if the 2022 regular season would be a huge surprise. A new deal should be easy to get done as well and it could result in Boswell becoming the NFL’s new highest-paid kicker. That distinction currently belongs to Baltimore Ravens kicker Justin Tucker, who signed a four-year, $20 million contract extension with his team in April of 2019. Tucker received $12.5 million fully guaranteed at signing as part of that deal, with $8 million of that being a signing bonus.

Currently, Boswell is set to earn $3,26 million in 2021 after signing a four-year, $16.8 million extension with the Steelers in August of 2019. Boswell received a $6 million signing bonus as part of that deal, and that was the only fully guaranteed money in that extension. This time around, Boswell might be looking to have the first two years of his contract guaranteed.

While a deal with Boswell is expected to get done by Week 1, we could be waiting until late August once again for such a transaction to be consummated. That said, new Steelers general manager Omar Khan was able to get safety Minkah Fitzpatrick signed to his new extension several weeks ahead of training camp getting underway. However long it takes, Boswell didn’t sound too worried about any sort of timeframe on Thursday.

“I think (the Steelers) just have their priorities, who they are going to sign and when,” Boswell said, per Adamski.

Over the course of the last three NFL seasons, 28 total kickers have attempted 50 more field goal attempts. Boswell is ranked third overall in accuracy of those 28 kickers. The two kickers with a better make percentage on that list of 28 players are Tucker and Younghoe Koo of the Atlanta Falcons. Boswell originally signed with the Steelers in 2015 after first spending short stints with the Houston Texans and New York Giants.