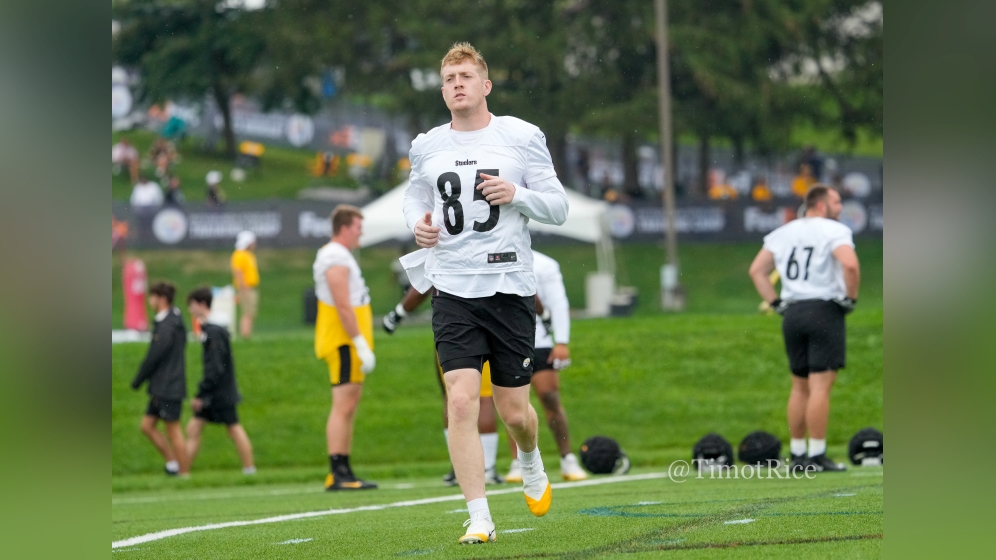 After practice concluded Friday afternoon at Saint Vincent College in Latrobe, Mike Tomlin took the stand to address the media about the team injuries. Tomlin mentioned that TE Pat Freiermuth had a hamstring injury that prevented him from participating on Friday after experiencing tightness on Thursday, causing him to miss the couple periods. Tomlin made it sound like a minor issue for Freiermuth and that he should be expected to return relatively soon after getting evaluated and cleared to return, calling him “day-to-day”.

However, when he mentioned Freiermuth’s injury, Tomlin was quick to bring up the topic of opportunity that injury provides to other players on the roster. Instead of having the media focus on those who are unable to participate in practice due to ailments, Tomlin rather encourages that attention be paid to those who can step up in their absence. In the case of the TE position, Tomlin mentioned one name in-particular that benefitted from Freiermuth’s misfortune on Friday.

“We tend to focus our energies on the opportunity that it may crate for others,” Tomlin said after practice Friday according to video via the team’s website. “Freiermuth’s not working today, so it’s an opportunity for Jace [Sternberger] to work and show his skills in a different group, for example. And that’s something we talked about last night as a team. We’ll continue to highlight because I want these guys to know in an environment like this, opportunity is going to knock.”

One man’s misfortune is another man’s opportunity according to Tomlin, and that was the case for Jace Sternberger yesterday, as he got more reps in the team session with Freiermuth on the sidelines. Alex Kozora mentioned a play that Sternberger made during the second team session in his training camp diary, saying he reeled in an 11-yard reception from Mitch Trubisky while covered by Arthur Maulet. It may seem like a trivial thing, but the more plays that Sternberger can make in practice and in the preseason, the better his chances are of potentially making the roster as the team’s TE3.

Sternberger is a player with some pedigree, being a former third-round pick of the Green Bay Packers out of Texas A&M where he had a breakout 2018 season with 48 receptions for 832 yards and ten TDs. He saw some action as a rookie in 2019 after starting the season on IR with an ankle injury but had his best season in 2020 where he recorded 12 receptions for 114 yards and a TD. However, Sternberger was suspended two games in 2021 after violating the NFL’s substance-abuse policy, and was waived by Green Bay after the suspension ended. He would then spend some time with the Seahawks and Commanders before signing onto the Steelers’ practice squad last November.

Jace Sternberger in for the score on #NationalTightEndsDay! #GoPackGo @_JStern

Sternberger has proven to be a capable pass-catching TE but hasn’t developed into the blocker or special teams contributor to make him a serviceable backup TE behind an entrenched starter like Freiermuth, but the promise is there where Sternberger could make some noise this preseason should he capitalize on the additional reps and show that he can be a more well-rounded TE. He’s on the outside looking in at the moment, but Sternberger may be a guy to keep an eye on during preseason action.